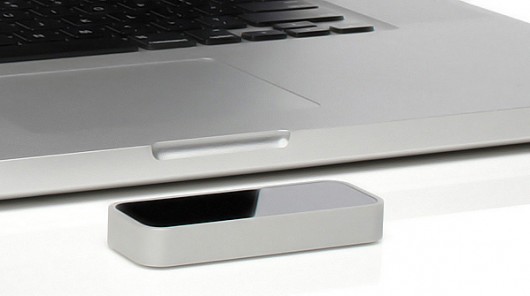 I had pretty much assumed that MS Kinect will be the tool that finally brings us all those “Minority Report” gesture controls they do all the time in movies now.  So the Leap showing up and, basically, jacking the spot in front of the line is quite a surprise to me.

What is this 3D gesture remote control magic you talk about?  Well, it’s a small USB gadget about the size of an iPod  that you put a feet or so away from your monitor.  Once plugged in, it will create a 3D interaction space over it that measures 8 cubic feet, tracking and interpreting all motions and gestures that take place within the area.

According to makers Leap Motion, the Leap isn’t just a functional motion-identifying device, it’s actually accurate enough to track your movements to a hundredth of a millimeter — which is 200 times more accurate than any motion gadget currently in the market.  Not only can it identify where your hand is (like the Kinect), it can also recognize complex finger movements (such as diagonal swipes and pinch-to-zoom, similar to a touchscreen) and finger-drawn handwriting (you can use it to sign digital documents).

The whole system is comprised of the small motion pad and a software component, which we’re guessing does a good bulk of the work translating your movements into actions. Setup is supposedly very simple — simply hook up the device via USB and follow the calibration procedure which consists of waving your hand around the interaction space several times.

The Leap won’t ship until early next year, but they are accepting a limited amount of pre-orders now.  Surprisingly for a novel technology, it will be sold at an affordable price of $69.99. Check out the video below of Leap 3D gesture controller in action.