LeapPad Explorer Is A Just-For-Kids Tablet 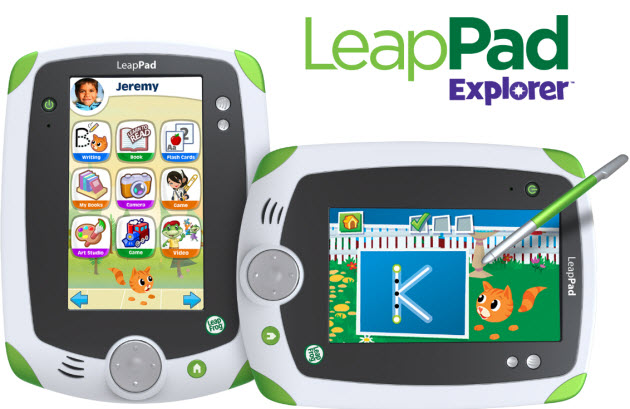 Kids love the iPad.  Hand them one and they’ll figure it out like it’s nobody’s business.  But iPads cost $500 a pop and it’s not exactly the kind of thing you’d like to leave on a tyke’s hyperactive grasp.  Enter the LeapPad Explorer.

Created by LeapFrog, it’s the latest evolution in the company’s line of education children’s products — a niche that new gadgets like the iPad and, moreso, the iPod Touch are starting to encroach on.  While it won’t have as many of an Android or iOS device’s bells and whistles, it packs just the right set of features that the company feels will be enough to keep children engaged.

The LeapPad Explorer is a just-for-kids tablet with the kind of controlled content that should keep parents from having to constantly check what their kid is doing on the device.  The learning materials in their library, which will include books, games, apps and videos that cover a gamut of educational subjects (math, phonetics, spelling, geography and more), target children from the ages 4 and up.

Made for little hands, the tablet has a wide and beefy profile with plenty of bezel to grab on to.  It’s constructed out of durable plastic, making it a lot less scary to entrust onto a child’s hands than your brand new Iconia Tab.  Hardware details include a 5-inch touchscreen (works with both stylus and finger), a built-in camera with video recorder, 2GB of storage and a mic.

Two colors of the LeapPad Explorer will be available: pink and green.  It will go on pre-order for $99 beginning June 29th, with actual shipments expected around August.