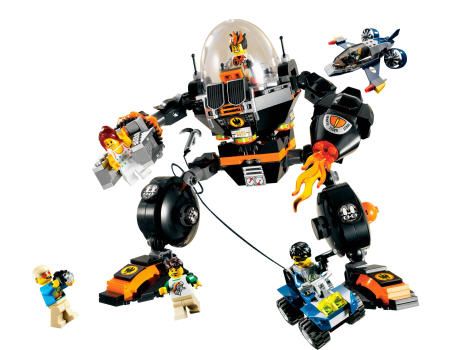 Nothing makes a miniature Lego city more exciting than a big giant robot strolling down the avenue.  For the Lego Agents 2.0 line, no collection is complete without Dr. Inferno’s latest creation – a stomping mechanical monster designed to crush everything in sight.

Robo Attack doesn’t come with its own buildings, although the chief antagonist’s walking chunk of steel should handily destroy any miniature city you are able to put together, as Agent Trace and Agent Chase both attempt to stop the giant from wreaking havoc.  Apart from the robot, his villanous master and the two agents, the set comes with three tourists, a harpoon-equipped quad-bike and a super jet.

The robot itself measures nine inches, with a massive 15-inch wingspan.  One arm sports a giant claw, with the other touting a flame thrower.  It splits into two parts, with the upper body acting as Dr. Inferno’s jet-pod when he tries to make his escape.

Even if you don’t have a Lego city for the unfortunately-unnamed monster to destroy, the robot is cool enough to be a fun toy (not to mention, a kick-ass display) all on its own.   When you’re alone, you can even try pitting them in battle and making the agents win, the way imaginative little boys like you are supposed to do.  Awwww….