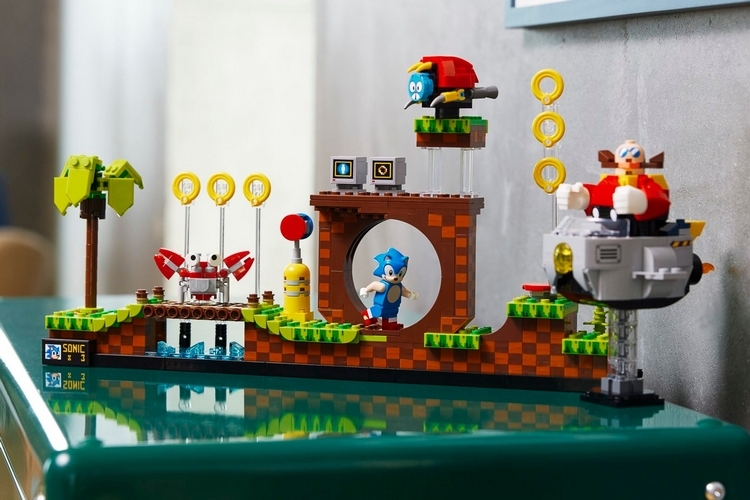 While Sonic doesn’t quite enjoy the same level of popularity that Mario has received in modern times, the fast-running blue hedgehog has made some inroads in mainstream popularity. You know… he had that live-action movie a while back, which will even be getting a sequel sometime next year. To coincide with that, along with the new Sonic Frontiers game announced at the Game Awards, he’s even getting a brick model, too, in the form of the LEGO Sonic the Hedgehog – Green Hill Zone.

That’s right, Sega’s speedy mascot is getting an official LEGO set, allowing you to play with the heroic hedgehog in a more tactile form. Whether you grew up playing the original game on the Genesis or discovered Sonic later on in other platforms, this model will let you relive that first hedgehog encounter right on a tabletop. LEGO’s Sonic the Hedgehog – Green Hill Zone recreates the opening level from the debut game of the franchise, so you can have Sonic running through the same platforms, clearing the same obstacles, and grabbing the same items you did when you originally played the game. Of course, you’ll have to hold him while walking the figure through every step of the way, instead of simply pushing buttons, but it should offer a different kind of fun. Staying true to the aesthetics of the 1991 Sega Genesis title, the set is rendered as a pixelated model, too, giving the toy a really authentic feel.

As with the game, the model depicts the scene as a side-scroller with a platform that starts off low, goes slightly higher, drops back down, enters a vertical loop, goes back up, and drops down again. All the little details in the original set are thrown in, too, from the palm tree at the start and multiple capture rings scattered around the platform to TVs atop the bridge loop and more. The LEGO Sonic the Hedgehog – Green Hill Zone also gets a lever-activated spring platform that the main character can use to perform a Super Sonic Jump, allowing you to send the included Sonic figure careening through the air just like in the game. The Sonic minifig included, by the way, isn’t the same as the one from LEGO Dimensions in 2016, as it gets a completely revised design with new prints on the legs, face, and torso, so you can bring out the other one and have them fight them over who is the real impostor. While Sonic is the only included minifig, there are other characters that can be built using bricks. Chief among them, of course, is his perennial nemesis, Dr. Eggman, complete with an Eggmobile that he can use to cruise around the platform to put a damper on Sonic’s run. You can also build Crabmeat and Moto Bug, so you can face off with lesser enemies before engaging in the boss battle. The set measures 14 x 7 x 2.5 inches (width x height x depth) and comes with 1,125 pieces.