Lekue Pasta Cooker Boils Your Spaghetti In The Microwave 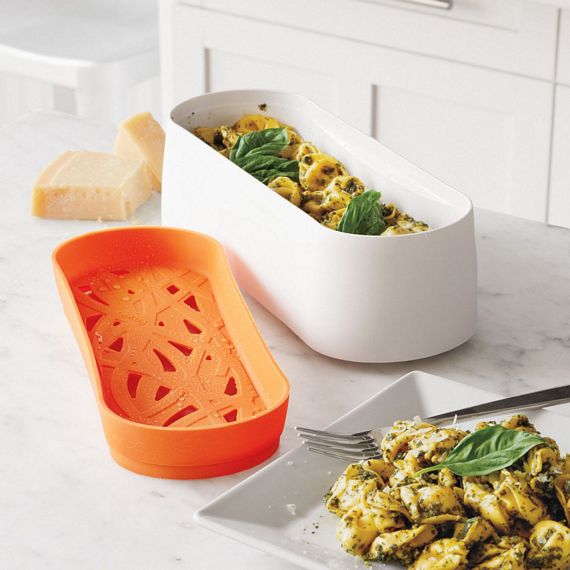 Spaghetti is one of the easiest food to cook (and with the Spaghetti Measuring Tool, you cook just the right amount every time).  But why not make it even easier by eliminating the act of cooking them on a pot of water boiling on a cooktop?  That’s exactly what happens with the Lekue Pasta Cooker.

Instead of waiting for water to boil, then cooking your pasta in it, the contraption lets you simply leave the pasta in the microwave with water and go about your day.  No need to boil anything separately.  Once done, just take it out and your pasta is ready.  All you need to worry about making is the sauce (and by “making sauce,” we mean open a can, lol).

While the Lekue Pasta Cooker looks nothing more than a simple plastic food container, it’s actually designed to “reinvent the way you cook pasta.”  It’s made from BPA-free platinum silicone and can withstand temperatures from -76°F to 428°F.  Dimensions are 10.5 x 4 x 3 inches, allowing it to fit regular-sized spaghetti without having to break them, with room inside for serving up to four people.   The lid also doubles as a strainer, so you can keep the collander in the cabinet and drain the pasta right from the same container .  Even better, you can serve the pasta and even refrigerate it for later on the same container you cook it in, so that’s a heck of a lot less dishes to clean up later.  Heck, just pour in the sauce and you can even pack this in for your lunch at work.

The Lekue Pasta Cooker is available now, priced at $35.