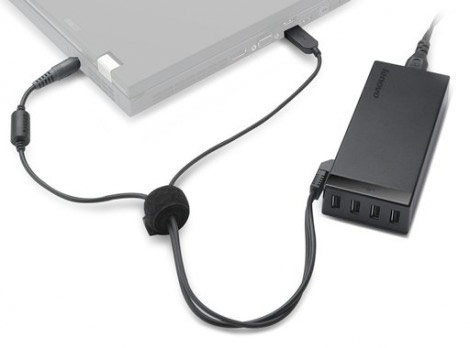 Here’s something we bet we’ll be seeing plenty of copycats soon: Lenovo’s Power Hub.     It’s a notebook charger that cleverly doubles as a USB hub, essentially extending the usability of that slab of brick you carry around on your laptop bag.

Designed to work with Lenovo’s computers (all 90W and 65W ThinkPad varieties), the 65W laptop AC power adapter uncharacteristically comes with four built-in USB ports.  They aren’t just for charging too – an integrated USB cable allows you to plug into your PC, which will recognize the accessory as a regular USB hub that will allow data transfers.

The Lenovo Power Hub comes with one dedicated charge port (the company says it’s capable of powering most mobile devices, even with the laptop unplugged) and three standard USB 2.0 ports.  It’s sized and styled like a regular brick of an adapter, so while it will now make sense to have it on your work desk, it’s still a really ugly slab.

Kudos to Lenovo for the innovation.  Priced at $74.99, though, it’s not the most enticing proposition.  Even if I had a Thinkpad, I probably would think before buying because of the price.  Fast forward to a year or two from now when all brand new laptops you buy will come with one of these things as a standard bundle – you can thank Lenovo for that.