Levitron Revolution Will Make Stuff Around Your Home Magically Fly 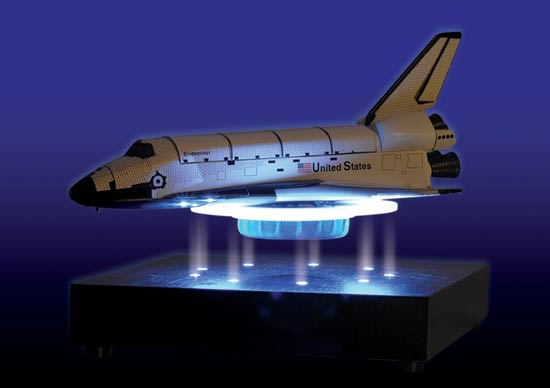 Want to see some small items in your house levitating?  Quit trying to learn magic and just wait a few months for the Levitron Revolution, a levitating disk with an illuminated base that you can put lightweight household items in.

Think of it like a small tabletop pedestal where you can set items on for display.  Instead of resting on the table’s surface, though, it floats a few inches up in the air.  As such, you can take your Barbie collection and turn them into Supergirls, soaring above ground wearing spandex and a cape.

Made possible by breakthroughs in magnetic levitation technology, the Levitron Revolution takes that old floating soccer ball (held by magnets top and bottom) a good deal further.  Together with its base that feature a rising bevy of lights, the suspended disk appears like a hovering UFO, rotating endlessly in place.  Any item in your home that weighs a quarter of a pound or less can be put on top of the floating panel, so they’ll hang and rotate in the air with it.

If you have any sort of collection of non-heavy items, from toy figures to pet mice (just kidding) to empty beer cans, you can load them on the Levitron Revolution for a really killer home display.  They’re preparing it for release right before Christmas, though price is still…errr…up in the air.