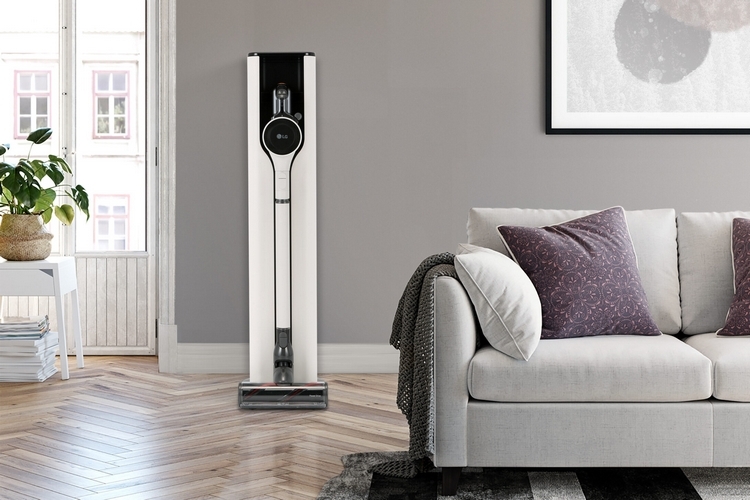 Many robot vacuums have a feature that automatically empties out the contents of its dustbin to a larger bag on the charging dock. This ensures the robo-vac can properly do its job the next time it’s scheduled to make the rounds. It’s efficient. So why not do the same thing for regular cordless vacuums? That’s exactly what they did with the LG CordZeroThinQ A9 Kompressor+.

We know… that name sounds ridiculously long. Then again, the name really doesn’t matter, since you won’t be summoning it in Alexa or pairing with it over an app, as it’s a rather traditional vacuum that you’ll have to push around the house to clean the floors, rather than doing everything autonomously.

The LG CordZeroThinQ A9 Kompressor+ is a cordless vacuum that comes with a charging stand, where you can dock it for automatically replenishing the battery whenever it’s not in use. Aside from charging the vacuum, the dock will also clean out the cleaning appliance’s dustbin, so it’s fully emptied out and ready to suck up dust the next time you take it out to do some housecleaning. Whatever dirt gets taken out, by the way, goes into a large bag on the dock, which is the one you’ll have to take out, dump in the trash, and replace as needed. Yeah, you’ll still have to take the crud out every now and then, but with the larger container on the dock, it’s a chore you’ll be required to do a whole lot less compared to the compact dustbin in the actual vacuum.

Based on the name, we’re guessing this is an updated variant of the Cordzero A9 Kompressor model already being sold on LG’s website, so it should have the same design that compresses all the dust, dirt, and debris it sucks up into dustbin using a built-in lever to maximize its capacity. It should also have the same dual swappable battery setup that allows you to go cleaning for two hours straight before having to take it back to the dock for charging.

The LG CordZeroThinQ A9 Kompressor+ comes with multiple interchangeable nozzles that can also be docked on the same charging stand, so both the main vacuum and all its accessories sit right in the same place. These include a two-in-one nozzle for cleaning tight crevices and pets alike, so you can go sucking up dirt from those tiny cracks and openings, along with your hairy pets, as soon as you’re done vacuuming the floors, while a power carpet nozzle sucks up dirt from carpets more efficiently. They even included a mop attachment that you can use to clean those same floors you vacuumed to a spit shine, allowing the device to go from vacuum to mop in a jiffy.

The charging station, by the way, comes with a full touch display, where you can fiddle with the vacuum’s settings. Other features include a five-step filtration system, removable washable filters, and a detachable handheld vacuum.

The LG CordZeroThinQ A9 Kompressor+ will make its public debut at the virtual CES next week.