Why Use Multiple Monitors When The LG EA93 Will Do The Job? 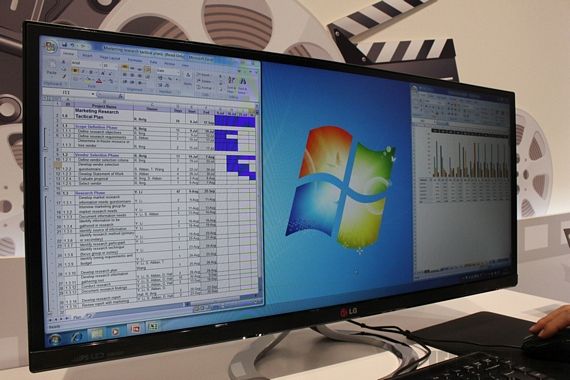 Three monitors lined up at eye level makes sense, especially when you need to keep tabs of multiple things at the same time.  It stops making sense, however, when you pick up this LG EA93 Monitor.

Possibly the coolest monitor I’ve ever seen, the ultra-widescreen display  boasts a 21:9 aspect ratio, providing enough screen real estate to leave several windows in the foreground, killing the need for multiple monitors.  Well, most needs anyway — it can’t quite cover the kind ground the Humanscale Paramount does. 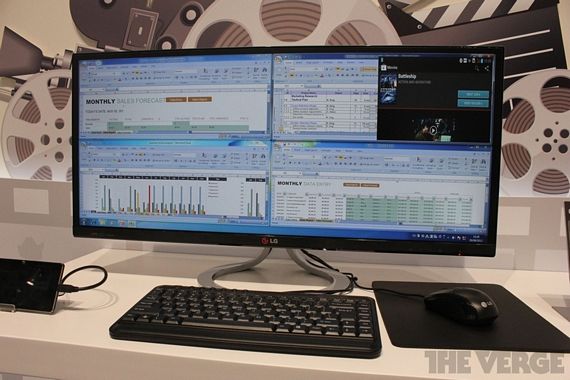 The LG EA93 is a 29-inch IPS monitor with a total resolution of 2560 x 1080 pixels.  While this is obviously great for lining up three browser windows or three spreadsheets at the same time, the monitor might even prove better for Windows 8 and its Metro Start Menu, which should make beautiful use of the extra horizontal space.  Apart from that, there aren’t many frills.  Then again, you don’t exactly need extra features when you’ve got a display equivalent to about two (and change) screens in a single panel.  It’s awesome enough as it is.

Currently, the LG EA93 is on display at LG’s booth at IFA.  No word on exact pricing, but it’s supposed to be released sometime in January.