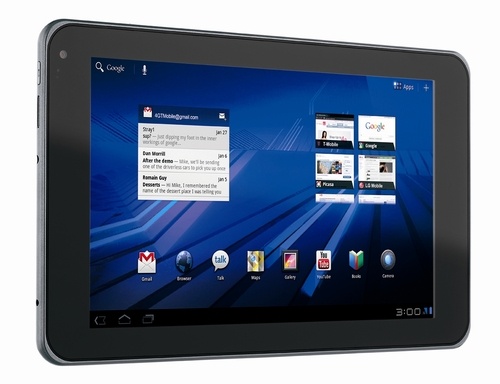 LG has announced their first foray into the world of tablets and it could be big.  Called the LG G-Slate, it one-ups the field by throwing real stereoscopic 3D into the mix.

Both viewing and creation of 3D content is supported by the tablet, which boasts a 3D display and dual stereoscopic cameras.  Unlike the 3DS, however, watching 3D content on the 8.9-inch capacitive touchscreen requires wearing a pair of bundled glasses (which, we fervently hope, isn’t the cardboard variety).  The two 5.0 megapixel cameras on the rear can record full 1080p clips in 3D, allowing you to finally fulfill your dream of shooting home videos with your cats in eye-popping realism.

The LG G-Slate relies on the dual-core Tegra 2 chipset for muscle, which can process both 1080p and 3D videos like it was nobody’s business.  Only 720p 3D can be viewed right on the tablet’s display, though — you’ll need to output your 1080p 3D videos to an external display over HDMI.

Aside from the 3D-capable hardware, it’s also got a 2.0 megapixel front-facing camera for video chat, 32GB of onboard storage, WiFi and support for T-Mobile’s HSPA+ network.  Like the Motorola Xoom, the tablet-optimized Android 3.0 Honeycomb will command the action.

From the sound of it, the LG G-Slate is a solid effort to stand out from the oncoming glut of Android tablets.  While I’ve never hopped on the 3D bandwagon myself, that extra feature can make the difference for a lot of consumers who will be shopping for a tablet this year.