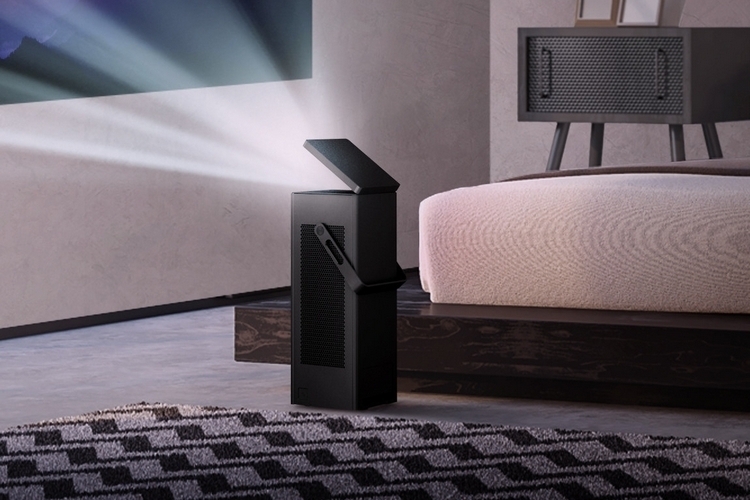 There are a few options for short-throw 4K projectors currently in the market, from expensive rigs like Sony’s line and affordable units like Optoma’s UHD60. All of them, so far, have come in a traditional projector form factor, which makes them quite substantial in size. The LG HU8OKA bucks the trend by coming in a smaller package than other UHD projectors in the market.

Clad in a form factor resembling the upright box packaging of liquor bottles, the projector takes up minimal floor space. Whether you set it down on the living room floor, mount it up a wall on the bedroom, or hang it from the ceiling, this thing lets you enjoy large-screen 4K viewing without taking up a lot of room. That’s right, it can beam images properly even at odd angles, a capability made possible by the outfit’s mirrorless L-shaped engine. 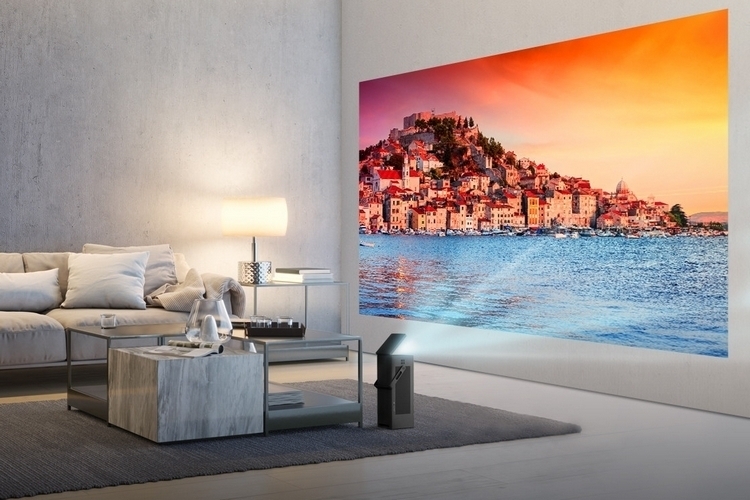 The LG HU8OKA’s upright form factor puts the projection hardware at the top, so it can beam the image at a proper viewing height even when you place it on the floor. Incidentally, this happens to be the outfit’s first 4K projector, which is quite impressive, seeing how they’ve effectively outdone everybody else as far as size is concerned.

Aside from being LG’s first foray into UHD projectors, the model is also their brightest ever, boasting a maximum illumination of 2,500 lumens. Seriously, that’s a full 500 lumens brighter than their flagship full HD projectors. That brightness means you can watch using the projector without having to turn off all the lights in the room – sure, it will still look better with less lighting, but it doesn’t have to be pitch black either to beam a nice picture.

The LG HU8OKA can beam a screen with a maximum size of 150 inches in full 4K resolution, complete with support for HDR content, so you can get a large screen with immense detail in glorious colors. Basically, everything you want in a modern living room TV. Except, you know, it’s a compact projector rather than a massive panel. If the projector looks a bit like a speaker, that’s because it comes with integrated audio, which is provided by two seven-watt speakers that should deliver somewhat satisfying sound. Alternatively, you can also hook up external speakers and soundbars either through HDMI, an optical connector, or Bluetooth, so you can use your existing audio setup.

It comes with LG’s webOS 3.5 Smart TV interface, so you get a built-in interface for flipping through different streaming services. That means, easy access to a variety of apps, from YouTube and Netflix to Hulu and more. It should also be compatible with the outfit’s Magic Remote app for easy controls, with support for both keyboard and mouse for interacting with the interface similar to a PC. There are also USB slots for hooking up hard drives filled with your own media content.

No word on pricing or availability yet for the LG HU80KA, but the outfit claims it’s going to be “affordable.” Based on the fact that it’s a compact 4K projector that’s the brightest the outfit’s ever made, we doubt it.