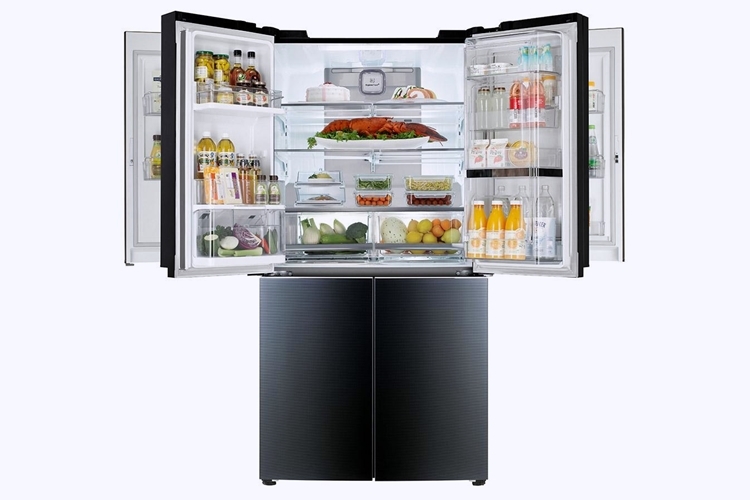 LG’s Door-In-Door Super Capacity fridge is pretty awesome, letting you keep frequently accessed items in a secondary compartment on the door, without letting cool air escape from the main chamber. A new version of the appliance called the LG Door-in-Door Mega-Capacity doubles the secret door compartments to give you even more storage space.

A two-door refrigerator, it comes with the door-in-door feature set up on both left and right doors, with the right one accessible via a button on the handle and the left one accessible using a trigger at the bottom. That way, you can store more frequently-used items without letting out the cold, allowing your fridge to further optimize its power consumption.

According to LG, the secondary compartments in the LG Door-In-Door Mega-Capacity will reduce the loss of cold air compared to regular fridges by as much as 47 percent. That represents a whole lot of potential power savings, especially when combined with the sophisticated tech typically found in the company’s refrigerators. In addition to the unique secondary doors, the fridge will be armed with the company’s Fresh Air Filter system, Smart Cooling Plus (which maintains optimal temperature and humidity), and Smart Diagnosis (which uses an accompanying Android app to help LG’s staff diagnose any problems with the fridge over the phone). Features include 34 cubic feet of total storage, LED lighting, a smudge-resistant tempered glass outer layer, and adjustable bins for accommodating odd-shaped items inside the shelves.

No pricing has been announced for the LG Door-In-Door Mega-Capacity refrigerator, but it will debut at the upcoming CES show next week.