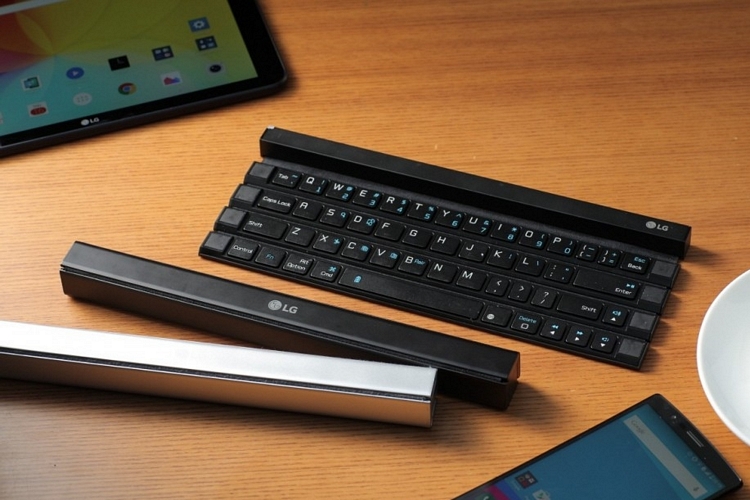 Folding keyboards are nothing new, especially since the advent of mobile devices made them a coveted accessory. The LG Rolly does every folding keyboard design we’ve seen one better by folding after every row, turning into a rectangular bundle that you can carry in your pants’ back pocket (albeit sticking out), dump in a purse, or hold in a tiny corner of a backpack.

That’s right, it’s a mobile keyboard that you can carry with the convenience of a long stick of Toblerone. Sure, you can’t eat it, but it should save you from the inconvenient hassle of virtual keyboards, whether you’re solving a crossword puzzle app, typing an email on your phone, or editing a report on your iPad.

Unlike those bendy silicone keyboards that many people are making do with, the LG Rolly is cut in solid plastic, so it delivers a more tactile, desktop-like feel. It boasts a key pitch of 17mm, just a smidgen shy of the 18mm minimum recommended for desktop keyboards, with an integrated stand for holding tablets and phones at a comfortable viewing angle. When it’s been paired over Bluetooth with a device before, the keyboard will auto-pair as soon as the user unfolds it, with the ability to connect and quickly toggle between two devices at the same time. There’s no need to recharge the battery, either, as the keyboard uses a single AAA, which can last it up to three months of use.

The LG Rolly is slated to go on sale in September. No pricing has been announced.