Life-Size, First-Generation Bumblebee Stands At A Front Yard In California 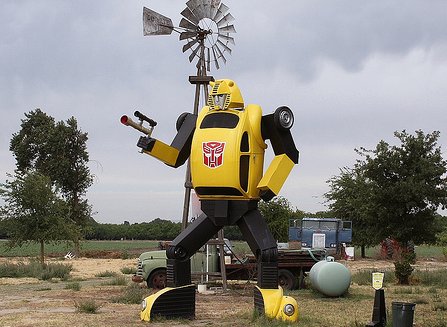 If you build it, they will come.  While that’s not always true (especially nowadays when everyone seems to be building something), it couldn’t be more fitting for life-size replicas of Transformers in your backyard.   That’s exactly what Tom Rhoads of Lemoore, California is doing and the first one to rise looks smashing – a first-generation Bumblebee from the original Transformers cartoons.

While Hollywood has fashioned the affable character into a Camaro (with a special edition model, no less), Bumblebee used to be a yellow Volkswagen Beetle.  Since chopping up a Camaro would cost an arm and a leg compared to a beat-up yellow Bug (especially considering it’s a hobby piece), Tom fashioned the robot after the way it originally appeared in the series.

The replica stands an ominous 18 feet tall and weighs a considerably light 1,200 lbs.  Apart from the chopped-up car body, the statue sports steel and angle iron on its leg area, so it stays secure.  According to Rhoads, it took him and a friend an entire year to put together, squeezing in the construction work during their spare time.

Not content with just one Transformer, Tom has indicated he’s planning to put together a couple more.  As you may have noticed, there’s a semi-truck parked right behind Bumblebee in the photo.  I’m pretty sure you can guess who that’s going to be.

Visitors can check out the statue for free by visiting Tom’s home.  No, you’re not allowed to climb it and sit on its shoulders like a child.

[Daily Stab via Daily What]