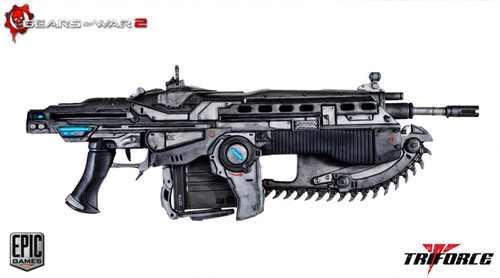 When burglars break into my home, this is the gun I want to be brandishing to scare them into fleeing.  Sure, this Lancer replica right out of a Gears of War scene is about as deadly as a kitchen pot, but I’ll be damned if you don’t piss your pants when I stick it in your face.

Crafted by some of the biggest names in the model toy business, every painstaking detail has been included, making it look like an ominous killing machine.  In fact, I wish they could have left out some of the lighting details because that would have made it even more scary.  LEDs on a gun, for some reason, just screams toy, even when it’s big and burly. 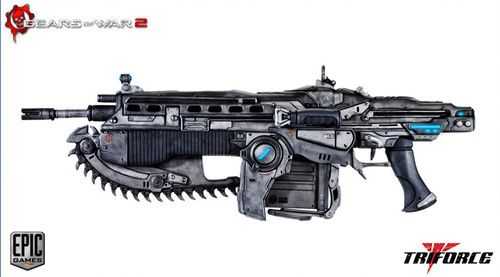 Measuring 40-inches long and sporting a 1:1 scale with the Lancer used in the actual game, the battlefield implement should not look too out of place with actual automatic weapons.  It’s quite heavy at 15lbs, though probably not as weighted if this were an actual gun packing both the firing mechanism to shoot bullets and the motor components to saw your enemies’ heads off.

It’s not real steel, though, so that’s a slight bummer.  Instead, it’s been fashioned out of polystone (unsaturated resin, MMA and natural minerals) with a hand-painted finish.  Looks way realistic, though.

TriForce Sales is releasing the Gears of War Lancer replica for $950 beginning in February of 2010, just in time to make you wonder whether to buy your girl a gift or splurge on one of these instead.  Only 500 models are going to be made, so best give it some serious thought.