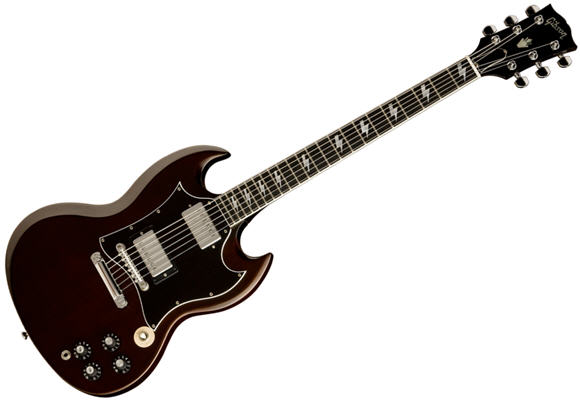 Tired of wasting your life away on Guitar Hero?  How about picking up a real six-stringer for a change?  If you loved AC/DC guitarist Angus Young’s frantic “big rock” guitar sound, you might want to look at dropping some cash for the Gibson Angus Young SG Standard, a carefully-crafted recreation of the axeman’s favorite instrument.

As the stories go, Angus has been using a trusty ’68 SG since the band’s inception in 1973, wringing its unusually slim neck at every show and major recording the band has done throughout the years.  Now, the Gibson Custom Shop is bringing the classic back to life in a limited edition spanning a mere 250 units.

How faithful will the reproduction be?  According to the Gibson site, the Angus Young SG Standard will capture the entirety of the original’s “tone, look and feel,” modified only according to custom requests from the legendary musician himself.  Features include the instantly recognizable twin cutaways with pointed horns, custom-spec Seymour Duncan Pearly Gates humbucking pickups and hardwearing 22-fret ebony fingerboard with lightning bolt inlays.

The guitar’s body will be shaped from mahogany, with the neck built out of  “quarter sawn” maple wood.  It will be hand-finished with a nitrocellulose treatment and clad in an “Angus Cherry” color.  You can check all the technical details over at Gibson’s site, where they list everything that went into producing the axe.

Each Gibson Angus Young SG Standard will be treated to vintage aging (so they look like they’ve been through hell and back).  Of the 250 pieces, 50 will be aged in-house, while the other 200 will get Gibson’s VOS treatment.  The in-house models will be personally signed by the performer and retail for $9,409, while the rest can be had for $6,115 apiece.