Litter Robot Cleans Up After Your Cat, Looks Like A Real Robot 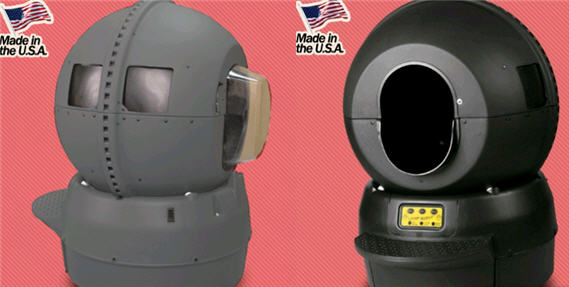 Felines do a lot of things.  They eat, take cat naps, purr and play sweet.  What they don’t really do is clean up their own litter box, which leaves you to deal with scooping the poo out of that plastic tray all on your own.  Multiply that workload by how many cats you have and I can feel your pain.

The Litter Robot seeks to save you from your self-inflicted chore (you did bring in those cats, after all), reliably and automatically performing the job all on its own.  A snazzier-than-average litter box, it is self-cleaning, requiring you to do nothing else except pull out the bag of dirt from the front drawer and replace it with a new one.

With a barrel-like interior, the Litter Robot automatically rolls to separate the poo from the litter, dropping it into the bag below as the catch basin opens.  After that, it rolls right back into place, leaving the whole thing sealed and odor free, ready for the next series of attacks.  It has a cat sensor so it knows when NOT to activate the disposal mechanism (unless you want your cat to end up in the trash bag, at which point you can probably try to disable it).

While we’ve all seen our own share of self-cleaning litter boxes, I haven’t really come across anything else that looks like a real robot – add in some LEDs and the Litter Robot should fit right at home in a low-budget sci-fi movie.   It’s been available for a while now for $349, although Amazon has it for around $30 less.