LiveRider Equips Your Bike With An Onboard Computer 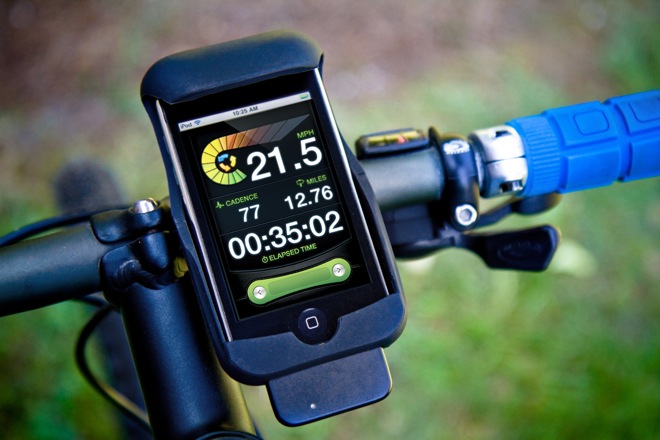 Cars have long deserved computers.  Ever since David Hasselholf rolled with KITT in the Knight Rider, we all knew it made perfect sense.  Bicycles, on the other hand, are manually-operated and are largely Luddite possessions.  Why the hell would you install a computer in one?

The LiveRider kit is a hardware/software combo that, when paired with an iPhone or an iPod Touch, lets you equip your pedal-pusher with an onboard computer.  While it won’t talk like Kitt does, it will do a lot of fancy things, such as show you a variety of statistics and record information on your riding.

Hardware consists of a dual-mode sensor (it’s permanently sealed for protection from the elements) which ties onto the chainstay, near the bike’s rear tire, and a shock-absorbing cradle mount for the iPhone right on the handlebar.  The frame-mounted sensor gets input on speed and cadence using magnets, which it beams into the cradle’s receiver via 2.4GHz RF.

Information displayed include elapsed time, distance traveled, cadence speed, watts, pace, calories burned, average speed and maximum speed, along with ghost data of previous runs (called “Chase Rider”), so you can race against your own previous best performance, ala Super Mario Kart.  All this, by the way, in a gorgeous and colorful UI.  It can also access GPS data, as well as inclination information using your iPhone’s tilt sensor.  For your logs, all the data can be compiled  into a spreadsheet-friendly format and emailed to your computer.

The LiveRider kit retails for $99, with the accompanying software available for free download from the App Store.  Do note that the specs sheet says it will only work for the 2G, 3G and 3GS models of the iPhone, as well as the 1G and 2G versions of the iPod Touch.