Living The Millionaire Lifestyle: My Garage Is A 108-Foot Sunseeker Predator Yacht 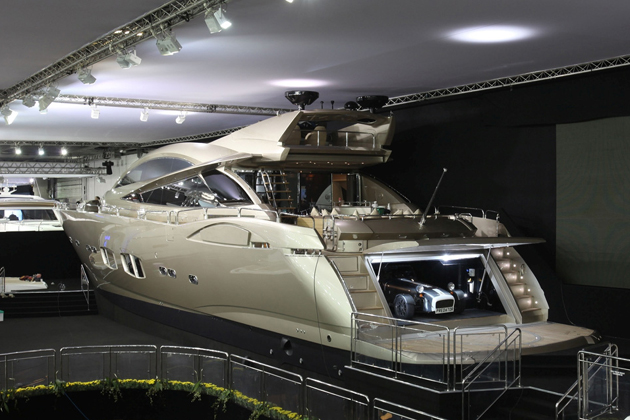 When you pair off luxury with awesome, you get a picture of how gazillionaires live.  That’s exactly what Sunseeker did at the London International Boat Show, showing off one of their Predator 108 Special Editions with a Caterham Se7en stowed on the vehicle compartment.  Yikes.

Sunseeker debuted their new 108-foot flybridge motor yacht at the event, paying special attention to the garage area at the stern of the boat.   Normally intended as a launching pad for a smaller motorboat, they threw in one of the iconic Se7ens instead, making the duo a millionaire match made in heaven.

The Sunseeker Predator 108 Special Edition is a peformance-oriented luxury yacht, noted for both its glamorous fittings and agile operation.  They’re officially billing it as “the sea’s most desirable cruiser,” and it’s tough to argue – capable of up to 34 knots, it’s a veritable ocean racer, with enough trimmings to satiate even the most discriminating rich people with nothing better to do.  Up to eight guests and four crew can comfortably partake of everything it has to offer.

According to Sunseeker, the car can roll directly out of the garage area and into the harbor.  I guess you can also drive it directly into the water if you feel like it (hey, you’re a gazillionaire, you can do what you want).  That will probably look like a scene straight out of an action movie, which is awesome, especially when it jumps right into the mouth of a killer whale.