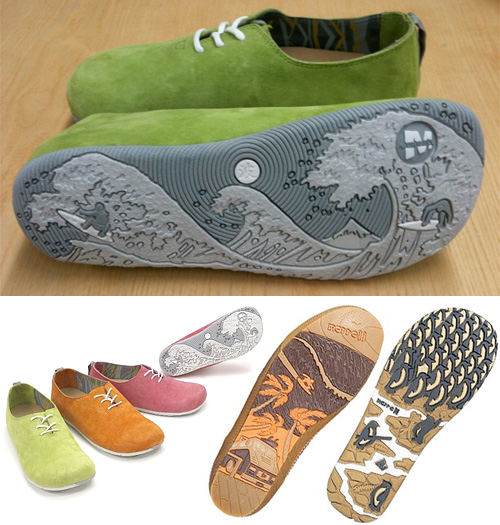 Shoe companies usually design soles with traction in mind.  These unique loafers from Merrell, however, add a little more flair to your shoe’s bottom, decking it with designs that resemble “ukiyo-e,” those classic Japanese woodblock prints.

Given how ordinary-looking the shoe uppers appear, the sole really is the star attraction here.  As such, we completely expect to see these footwear in stores with the bottom prominently displayed on the racks.  And if you’re going to wear one, better lose those manners and begin putting your foot up on tables more, lest leave the best part of your shoes go unnoticed.

Current designs include Katsushika Hokusai’s “Great Wave,” a tropical shore scene called “Swami” and the odd “Surfing Penguin.”  Each shoe comes with a largely blank upper design, a short strip of white laces and air-cushioned insoles.  Both the male and female versions of the shoes take on the same unisex styling in a variety of colors, including salad green, orange, coral rose and dark royal.

The only caveat?  It’s a lot easier to isolate your footprints in case you leave them in a crime scene: “What do you mean you didn’t kick him in the face?  See that red mark?  It’s a penguin with a surfboard right there, buddy.”

We doubt Merrell’s line of casual shoes with “ukiyo-e” soles will catch on in most markets (I mean, no one looks at how elaborate the styling of your soles are), but it’s still pretty cool.  They’re currently available strictly in Japan, priced at ¥10,290 ($120) a pair.