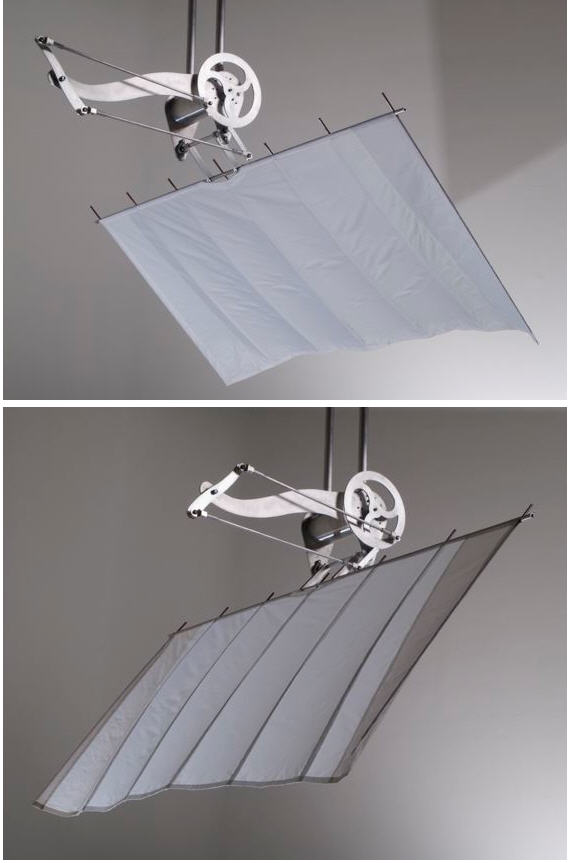 Electric fans are nice, but hand fans are magical.  Especially when it’s someone else swaying the thing to cool you down, making you feel like a ruler of lands in days of yore.  The Loft Wing is like a cross between two, using an electrical mechanism to gently swing a large swath of fabric that blows comforting winds your way.

Technically a ceiling fan, the new creation gets rid of the high-speed rotary mechanism, replacing it with a large wing that sweeps across the room to deliver a light and natural breeze.   Sure, it’s not as fun as having slaves fan you with palm leaves all day long, but it will do. 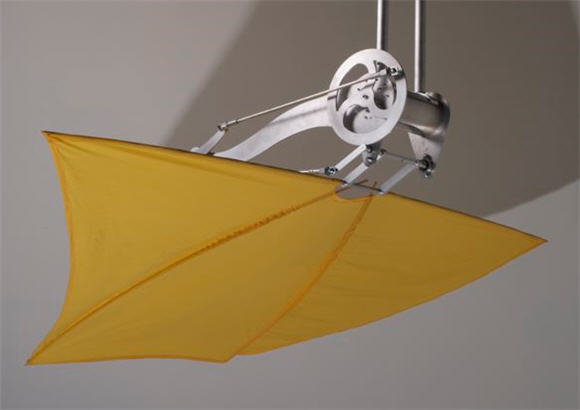 The Loft Wing uses a 9.6 x 4.6 inch fabric wing (available in many custom colors), held up by tapered, high-strength carbon fiber rods that sway it over and over while suspended in your ceiling.  A German-made electric motor powers the lightweight mechanism, whose parts are built out of aircraft-grade 6061 aluminum.  Its creators claim they have custom mounts for any ceiling configuration, allowing you to hang the overhead fan however your interiors are set up.

So why not just use a regular ceiling fan?  Because this thing looks downright gorgeous, lending rooms with a unique feel the moment you step in.  Even better, it uses up less energy than a conventional fan, sipping an economical 15 watts for operation.

While I’m not sure how the Loft Wing’s cooling ability stacks up to a high-speed, industrial ceiling fan, it does bring several benefits that make it a worthy option.  It’s supposedly available now, although you’ll have to contact the manufacturer to discuss pricing.