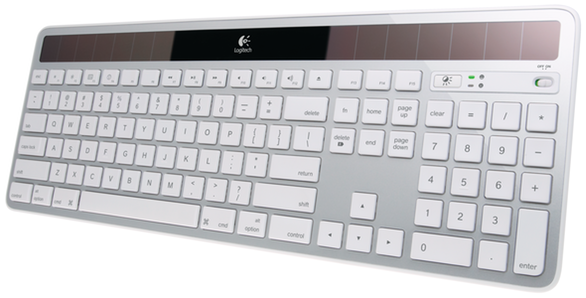 Because they lessen cable clutter, wireless keyboards help make your desk a better place.  The fact that you’ve got another gadget that can run out of batteries at any time, though, just makes it less appealing.  The Wireless Solar Keyboard K750 for Windows and Mac, however, nukes that problem out of its sordid existence.

Made by Logitech, the keyboard solves the battery problem by integrating solar panels that can charge the gadget on ambient lighting alone.  Unless you’re working in a windowless room with the lights out, that means you’ll be using it uninterrupted till the end of time.  Or until one of the keys gets stuck, whichever happens first.

What if you like working in the dark inside an unlit cave?   Not a problem.  Just expose the Logitech Wireless Solar Keyboard K750 to light until the battery is fully charged and you can lock yourself like a hermit in total darkness for up to three months.

The solar power isn’t the only thing it’s got going for it either.  At only 1/3 of an inch thick, it has quite the slim profile, so it ain’t all that shabby in the looks department.  Other details include 2.4Ghz wireless connectivity, a Logitech Keyboard App (for keeping track of battery levels), and different standard layouts for the Mac and Windows versions, respectively.

The Logitech Wireless Solar Keyboard K750 for Windows has been available for a while now, with the Mac version coming to stores later this month.  Price is $60.