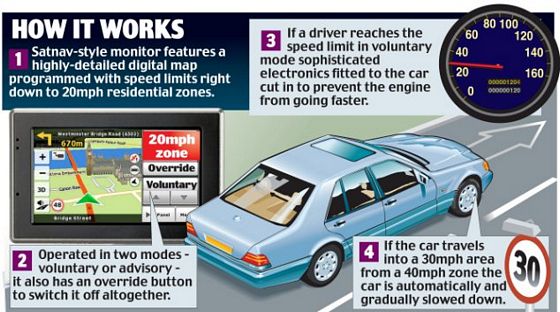 Attention overspeeding motorists – your days may be numbered.  Transport For London is announcing a large-scale trial implementation of the  Intelligent Speed Adaption, a sophisticated in-car system that makes it impossible for motorists to go over the speed limit.

The mechanism is pretty straightforward.  Your car gets loaded with an onboard computer that comes with a database of speed limits for public roads.   Your car (and its acceleration) will be tracked via GPS satellite, with the corresponding actions taken depending on what mode you’re currently operating in.

In “Advisory” mode, the in-dash screen will display the speed limit, along with a message warning you to slow down.  The other option, called “Voluntary” mode, will automatically seize control of your acceleration, throttling your gas until your speed goes down to prescribed limits.  The device comes with an override button, in case you’d rather ignore its proposed “assistance”.

Of course, a lot of people aren’t taking too kindly to the idea.  After all, you’re essentially curtailing people’s rights to kill each other on the road – nobody wants that.  Seriously, though, a car that steps up speed to change lanes and goes over the road limit while in “Voluntary” mode could easily cause a dangerous accident when there are several vehicles trailing behind.

Overall, it’s a cool (but potentially disastrous) idea that they’re hoping can cut down road accidents by at least 10 percent.  The pending implementation across a fleet of cabs, government cars and buses around London should tell us whether it can work long-term, though.  Since there’s always the “override button”,  I suppose everyone can still have a little fun.