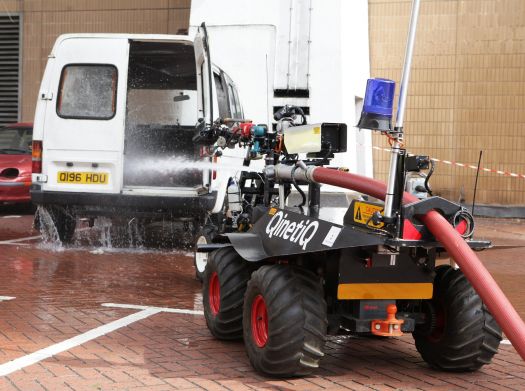 While human-eating androids and attention-hungry robots make us queasy about the idea of how these future Terminators could evolve, other varieties give us plenty to look forward to. A quartet of firefighting robots from London, for instance, effectively cut down the time needed to extinguish acetylene fires by over 80%.

Designed by defense tech company QinetiQ, the four robots are used exclusively in situations that involve cylinders of the industrial gas catching fire. According to the BBC, there have been 471 of these instances over the last five years and have been a particularly dangerous case for flesh-and-blood firefighters to handle.

Because of the perils of treating an acetylene blaze, areas under fire used to be cordoned off for up to 24 hours. With the robotic crew at work, the same situations are extinguished in well under three hours, all while putting none of the human firefighters in the London Fire Brigade in danger.

The four brave robots that make up the crew consists of Brokk, who uses a giant claw to pick up and move the burning cylinders; Talon, a bomb-disposal veteran who can climb stairs and crawl into small spaces; Black Max, who runs on four wheels and performs the traditional job of hosing down the flames; and Bison, who is fitted with numerous grippers and cutting tools, as well as an ability to shoot jets of water. They have, so far, worked together (along with their operators, of course) on ten jobs in 2009.

A video of the four machines in a demonstration is available at the BBC website. Check it out to see London’s firefighting robots in action.