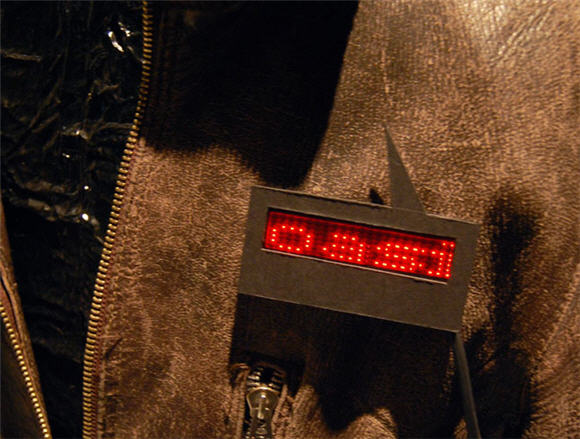 Don’t have enough fans on Twitter willing to listen to your drivel?  Try gaining a few more with Loud Tweets, a LED name badge hacked to display your personal Twitter feeds as a scrolling text.

I, personally, don’t get Twitter and find it an utter waste of time.  But that’s because I have an under-developed brain that can only handle a limited amount of information daily.  The rest of the world, however, seems  fine with reading hundreds of single-line messages from friends and strangers alike, so I’m not going to argue.  With Loud Tweets, you can now force people like me to look at your Tweets without having to subscribe to your profile.  Can you say torture?

The setup uses cheap China-made LED name badges, intended for use as a digital ID in seminars and conferences.  The original device sports a 21×7-pixel screen with three control buttons that can be used to program up to 255-character messages into. To allow Twitter messages to be displayed, an Arduino board has been attached for internet connectivity that works hand-in-hand with a Python backend that picks up the tweets and sends the updates.  The system simulates button presses on the LED panel to create the text.

Loud Tweets is currently still an ongoing project that, fortunately enough, is not in any form of production.  To my dismay, we’ll probably see a commercial variant sometime soon, considering how ridiculously big Twitter is getting.  For the next phase of the project, they’re looking to add a Hilo GSM module into the mix, so that you can have a truly stand-alone Twittering device stuck on your body.   I’ve seen the future and it scares me.