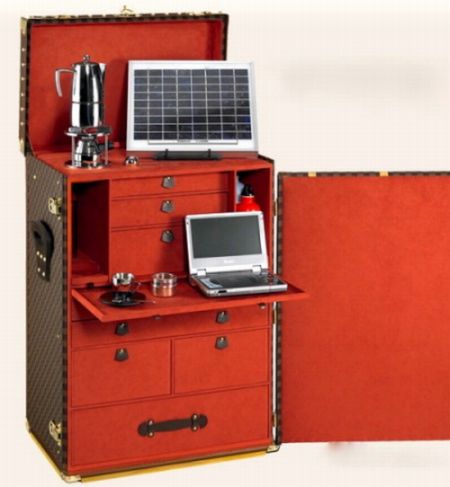 Traveling with a big, bulky trunk hasn’t exactly made a comeback in the travel industry.  There’s just nothing practical about it.  Who wants to haul a full closet of luggage around, after all?  As it turns out, at least one rich Chinese gentleman does and he commissioned Louis Vuitton to build it.

Called “Breakfast in the Desert,” the trunk was designed with the intention of being able to travel anywhere in the world, without having to cut back on the client’s favorite amenities.  With the large bin in tow, he can bring a good amount of supplies, all while watching movies and enjoying fresh-brewed coffee even in the most remote desert.

The trunk, which is covered in Damier canvas, comes with a portable DVD player with flatscreen display, two-way radio, TV tuner and a coffeemaker.  It packs a hidden battery stack, which is charged via two-solar panels.  It reportedly took Louis Vuitton an entire year to craft the oversized luggage, which I find strange since there doesn’t appear to be anything all that crazy about it.

From how it looks in the photo, it looks just like an oversized trunk that can double as a standing closet, with plenty of pull-out drawers and some table space.  They’ve probably got all the necessary holders for all the on-road luxuries stored inside the panels as well.  Still, at costs reputedly going for “tens of thousands of dollars,” I think someone got stiffed.

A trunk you can haul around to provide you with amenities is a cool idea, but the “Breakfast in the Desert” seems like LV just bought a small cabinet, decked it in luxurious material, scored a couple of electronic items and found a way to stack them all together.  What a damn cool way to make money!