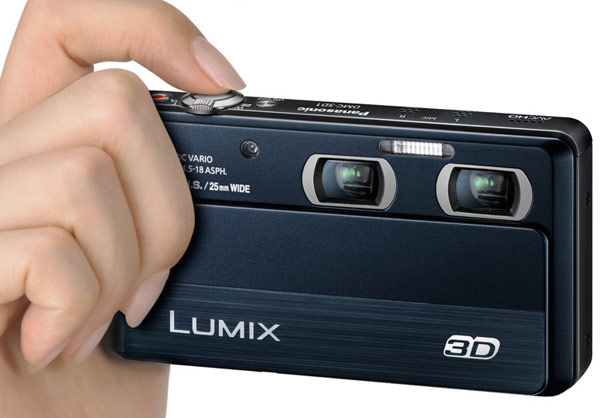 3D pocket cameras haven’t really taken off in a big way.  Considering we have more important things to worry about like zombies and aliens, it isn’t really surprising.  If you’re going to get a compact stereoscopic shooter, though, the Panasonic Lumix DMC-3D1 sounds like the kind of piece to go for.

Just like other 3D cameras, it can capture photos and videos in both 2D and 3D, letting you switch from headache-magnet stereoscopic shots to conventional images with just the toggle of a switch in the back. Armed with a pair of 25-100mm optical zoom lenses (30-120mm in 3D mode) and dual 12.1 megapixel sensors, it can take 8.0 megapixel 3D photos and 1080p 3D videos using the side-by-side method.

The Lumix DMC-3D1 has other tricks, too.  Using the twin-lens system, you can grab 2D images on one lens while shooting a 2D video on the other, allowing you to photograph and film the same scene at the exact same time.  You can also shoot videos and photos from two different angles of view simultaneously, so you can zoom in with one lens while getting a party shot with the other.  And you don’t even need a second cameraman to do the deed.

The camera body doesn’t look all that inspiring, but the 3.5-inch touchscreen ’round the back should be ample spacious for all the menu toggling and previewing you need to do.  Other features include an 8 fps burst mode at full resolution (no autofocus), Intelligent Auto mode and multi-process noise reduction.

Hitting stores right around December, the Panasonic Lumix DMC-3D1 will retail for $499.99.