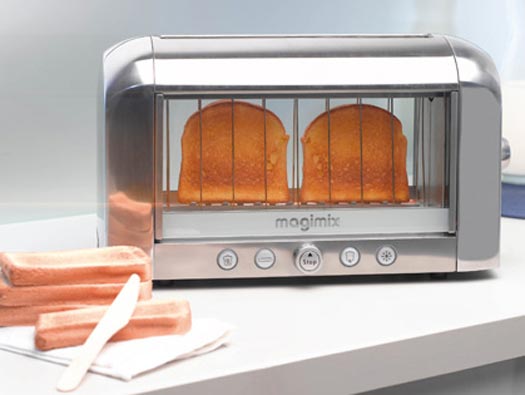 Hate burnt toast? Join the club. Better yet, petition Magimix to hurry up in producing the Toaster Vision, a see-through toaster oven which lets you see the bread as it bakes for a second time.

Since my mental faculties are also at their slowest early morning, my ability to make decent toast is often severely compromised. I’ve never burned toast bad enough to start a fire (seriously, those people should be locked away from the kitchen), but I’ve probably had more black toast than I could care for. With this see-through appliance, you can see the toast while it browns, allowing you to save it just in time before any of the charring starts. 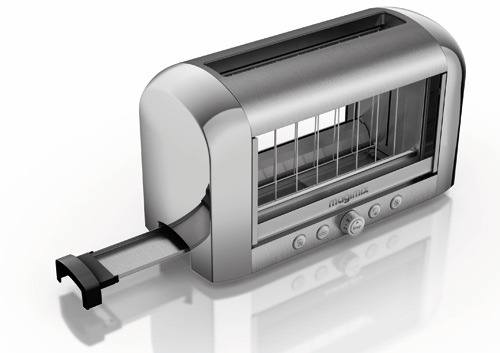 Magimix calls their Toaster Vision a “luxury toaster” and for good reason. Inside, it uses four quartz tubes to provide eight different levels of browning, with settings easily accessible from push-button controls. Eight different types of toasting power is, of course, confusing. That’s why Magimix didn’t stop at the stainless steel and cast aluminum body, choosing to throw in large double-insulated glass panels for the walls, allowing you to watch both sides of the bread as it cooks without letting out any heat.

According to the company, it has an extra-wide slot to accommodate varying widths of bread.  I’m sure your hand will fit snugly in there too, in case you’re trying to dream up attention-grabbing scenes for your next YouTube video (people can watch while your fingers burn – sensational).

While the Toaster Vision isn’t the first “transparent toaster” design that has come out, it should be the first one to see the light of a production run. Magimix is preparing it for exclusive sale at the Design Supermarket de la Rinascente Piazza Duomo in Milan beginning early 2010. Price is 250 Euros.