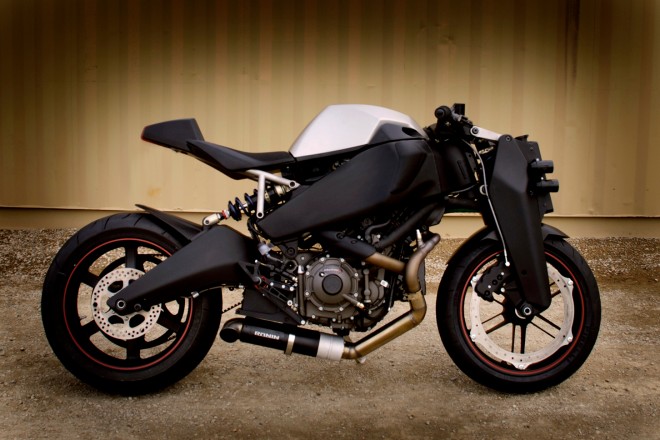 What happens to a Buell 1125R when a company who makes firearm accessories decides to customize it? It turns into the Magpul Ronin, which looks like the kind of motorcycle your favorite costumed supervillain would ride while wreaking havoc throughout the city.

According to the Colorado-based company, they were thrilled when they first heard that Buell was working on a water-cooled superbike. Being big motorcycle fans, they looked forward to the 1125R’s release, but felt deeply disappointed with both the way it looked and the way it worked. Basically, they loved the technology, but felt that the design fell short.  Knowing how much greater it could have been, the company decided to buy a bunch of the water-cooled bikes at wholesale after Buell shut it doors last year and went to realize their vision for the ride.

The Ronin sheds the original superbike’s bodywork and front-end, replacing it with a girder set-up and an integrated subframe, shorter tailsection and carbon-fiber airbox cover. According to the company, the changes are more than just aesthetic, with the updates paving the way for lighter weight (down 50lbs) and improved steering. A slew of other detailed replacements were made, resulting in the straight-out-of-a-comic-book look that the new motorcycle is rocking.

Boasting the original 146hp Rotax V-Twin paired with its newfound physique, the Magpul Ronin should ride as insanely as it looks. It’s still in functional prototype stage, though, so you’ll have to wait a while before being able to snag one. They also only have around 25 1125Rs in stock, so the final product should be very limited.

[Magpul Ronin via Hell For Leather]