Make Your Own Batsignal Projector 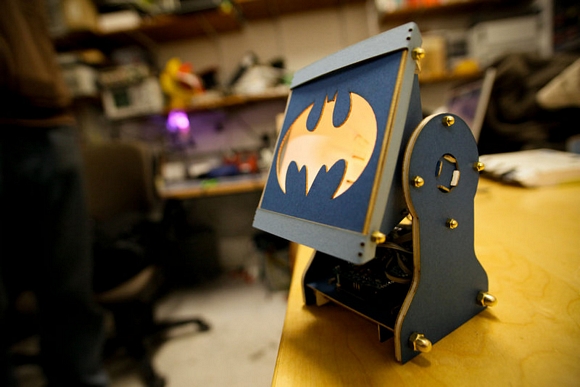 Can’t afford to build your own custom Batmobile to honor your favorite superhero?  Here’s something that might be more up your alley: a DIY Batsignal Projector.

While I doubt Bruce Wayne will see this from the other side of Gotham City, it should make a nifty bedroom lamp in case you need to amuse yourself.  Since it blinks, fades and performs other effects, you can also use it as temporary entertainment, if ever your TV conks out, your internet dies and your cellphone bricks in a holy trinity of destruction, like during a zombie attack. 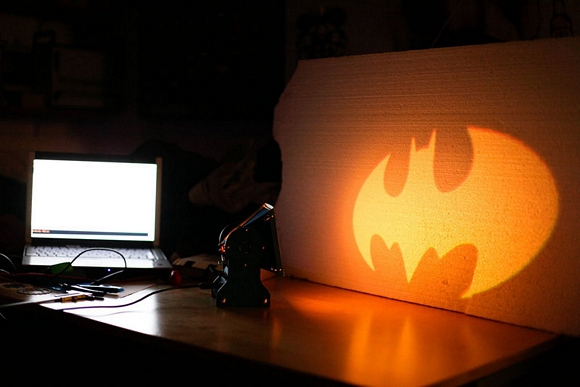 The Batsignal Projector is a cardboard projection lamp, armed with an Arduino chip to control the effects, as well as perform additional processing if you  can program it to (like taking Twitter calls for distress so Batman can be dispatched).  It uses a high-brightness Osram RGB LED (30mA per color), which the Arduino controls en route to a creative lightshow set atop a rotating axis.  The Batman logo is just a stencil set over the head, so you can substitute any specific cut-outs you want to project if ever the Caped Crusader doesn’t exist in your universe.  In my world, for instance, he’s long been dead since Michael Keaton ceased to reprise the role.

Created as a DIY project by Philipp Tiefenbacher, the instructions seem simple enough that even Robin will likely be able to build one without having to yell “Holy confusing engineering geeks, Batman!”   Then again, maybe he can’t.  Check out the complete instructions, along with the Arduino source code, over at Thingiverse.