Make Your Own Rainbow With The Handheld Rainbow Projector 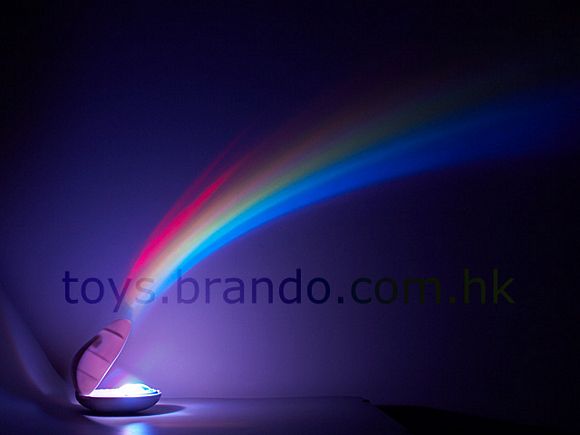 Ever wondered what’s at the end of a rainbow?  It’s this thing, the Handheld Rainbow Projector, a little clamshell box that projects a bow-shaped display of colors onto a wall (which, if you do it right, will look like it’s actually floating on air, like in the photo above).

While real rainbows are caused by the refraction and reflection of the sun’s rays through rain, this one needs neither the sun nor the sky.  Instead, all you have to do is crack it open, push a button and voila – an amalgam of colors right before you.  Now, all you need is a unicorn and all your fantasies as a five-year old can finally come true.

Essentially just a $25 flashlight of sorts, the device uses a baffle board to mess with the light it sends out of its frame, throws it at some sort of projection box on the upper flap and delivers a feint, but, gorgeous stream of colorful light.  It comes with a timer function, so you can set it in a corner and surprise unsuspecting people in the room when a rainbow magically appears out of nowhere.  The lights are delivered in three modes, Vivid, Slow and Variation, though the sales page doesn’t really explain what separates one from the other.

Personally, I’d love to use this as my night light.  What better way to sleep than with a cornucopia of colors that can bring back childhood wonder?  I’m hoping it looks at least half as good in lighted rooms as it does in dark ones, but since the product page never bothered to post a well-lit photo, I’ll just pretend that it does.  Aaaah.