10 Coolest, Funkiest, Most Interesting Things We Saw At Maker Faire NY Over The Weekend 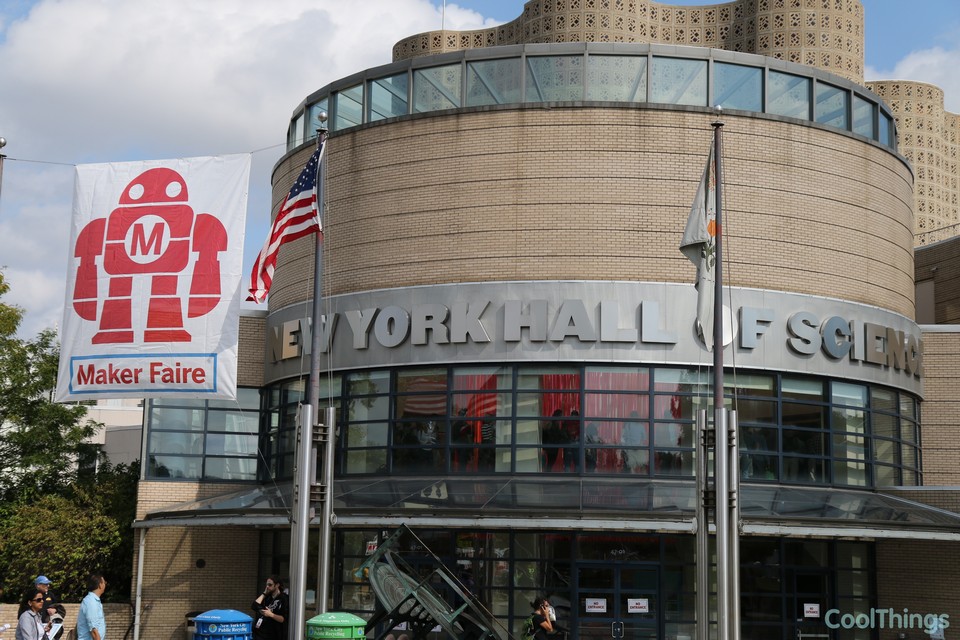 Self-described as “the greatest show and tell on Earth,” (and we agree with that statement) Maker Faire returned to  New York this past weekend, bringing with it a wide array of fascinating new technology, impressive DIY projects, and oddball curiosities that have all become a trademark of the ever-growing maker movement. Like every Maker Faire, the event brought together a wide cross-section of people, including engineers, craftsmen, educators, tech enthusiasts, artists, science fans, and the occasional indescribable figure.

Most importantly, there were plenty of robots.  And we always love robots.

Truth be told, there is so much to gawk at, it was hard to stay mobile.  I mean, you see a bicycle-powered giant alligator riding around and you just end up staring at it with a confused look on your face for an entire hour.  Yes, the annual celebration of DIY innovation and hands-on education is still weird, funky and interesting as heck.  Here are some of the most interesting curiosities we managed to catch at the lot. 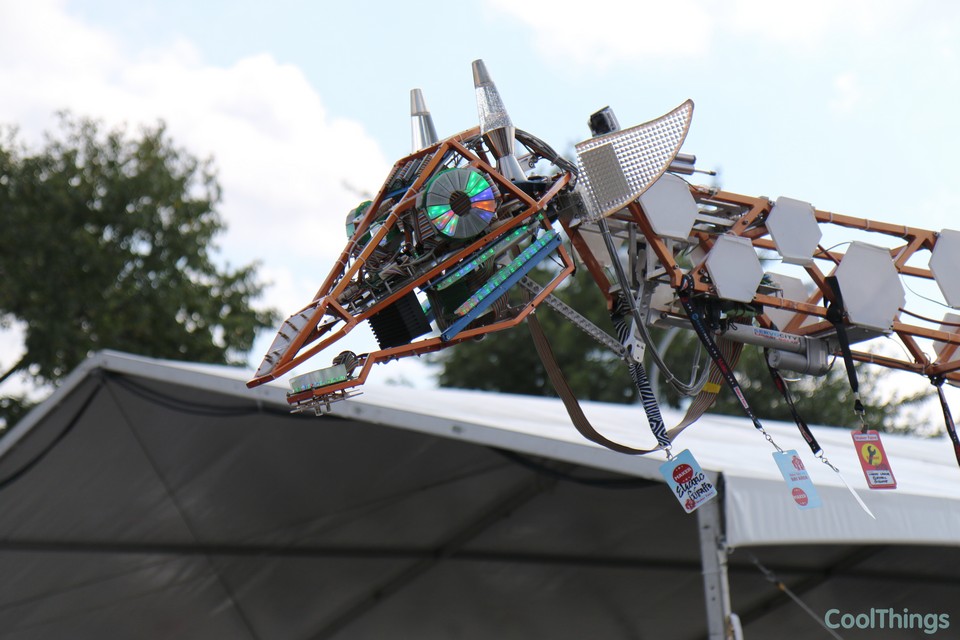 Remember Tamiya’s walking giraffe toy?  Well, somebody took that scale model’s walking mechanism and applied it to a life-size mechanical giraffe.  With a wireframe body, articulated neck, and enough bright lights to drive up your electric bill, it’s truly a sight to behold.  Plus, it stands 17 feet tall with the neck fully stretched, so there’s no way you can miss it. 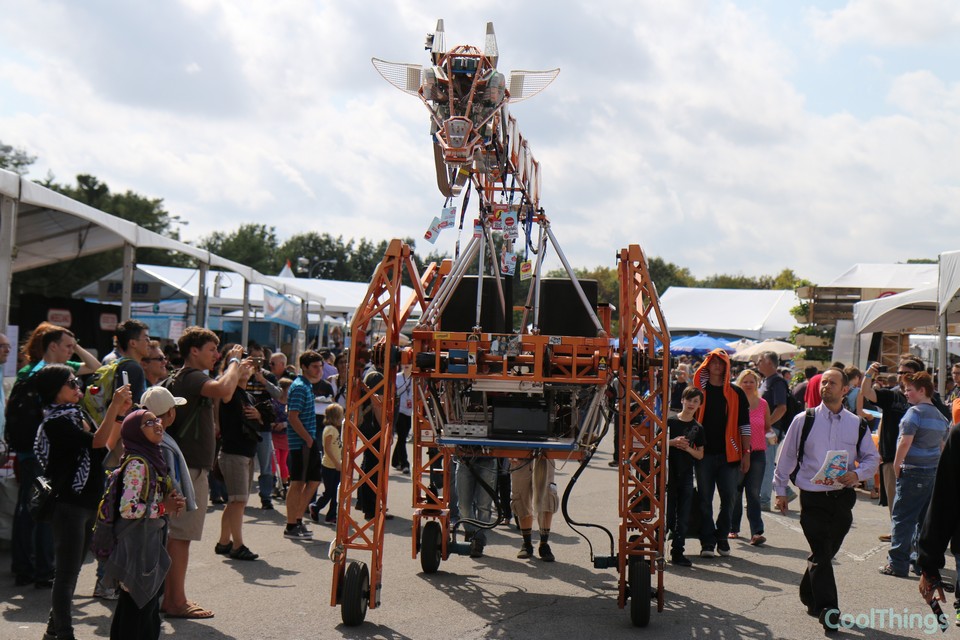 Other details include a 3 -horsepower electric motor for movement, a 500-watt audio system (sometimes, giraffes want to make noise, too), and a Neopixel LED network.  Oh yeah, this was originally designed as an art car for Burning Man, so it can ride several people on the integrated body cart while it makes its way around the jungles of outdoor festivals and indoor trade shows.

Check out a video of the Electric Giraffe from about two years back. 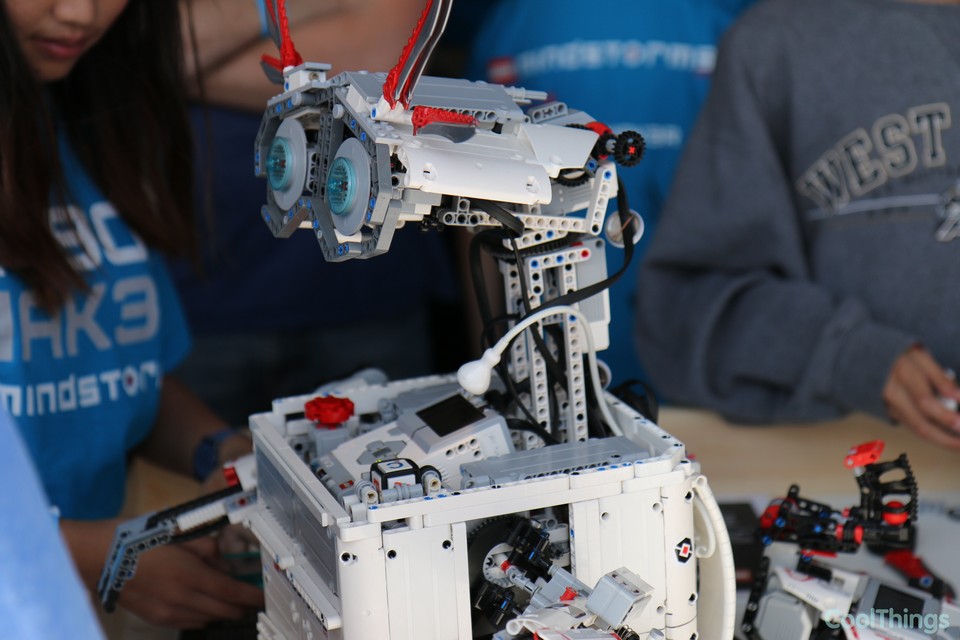 A Wall-E lookalike, QUIZ-E is a quiz robot.  No, it won’t answer school tests for you.  Instead, it goes around and displays a multiple choice question on a small screen to audience members.  Give the right answer and QUIZ-E will open his belly to reveal a special prize.  Answer wrong and the same belly will open to reveal a missile aimed at your face.  Just kidding (it’s actually aimed at your crotch).

Made from LEGO Mindstorms EV3, the robot can be driven around using the official LEGO Robot Commander app.  QUIZ-E is made by Marc-André Bazergui, a robotics enthusiast who had a couple of Mindstorms creation on display at the event. 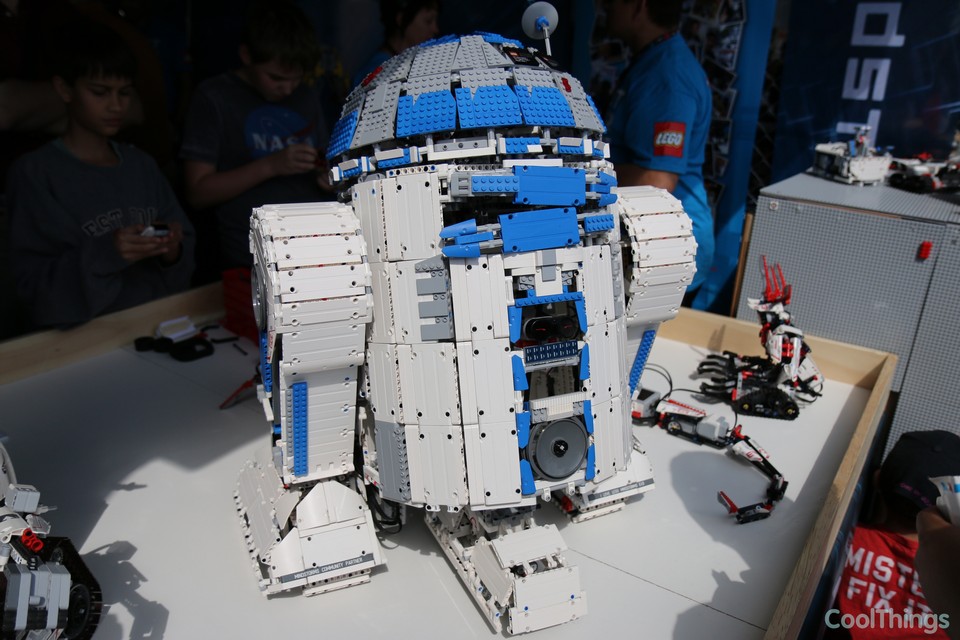 The second of Bazergui’s LEGO robots at the event, it’s a 2:3 scale (yep, bigger than the original) recreation of the famous Star Wars robot.  It’s made from LEGO Technics and Mindstorm EV3 parts, with plenty of details and moving parts.  Seriously, this is the finest walking, talking R2D2 build we’ve ever seen in real life.  We won’t be surprised if this guy ends up being responsible for the LEGO robot apocalypse (don’t laugh, it’s a real threat).

The video below from the creator shows an unfinished version of the robot, filmed a few months back. 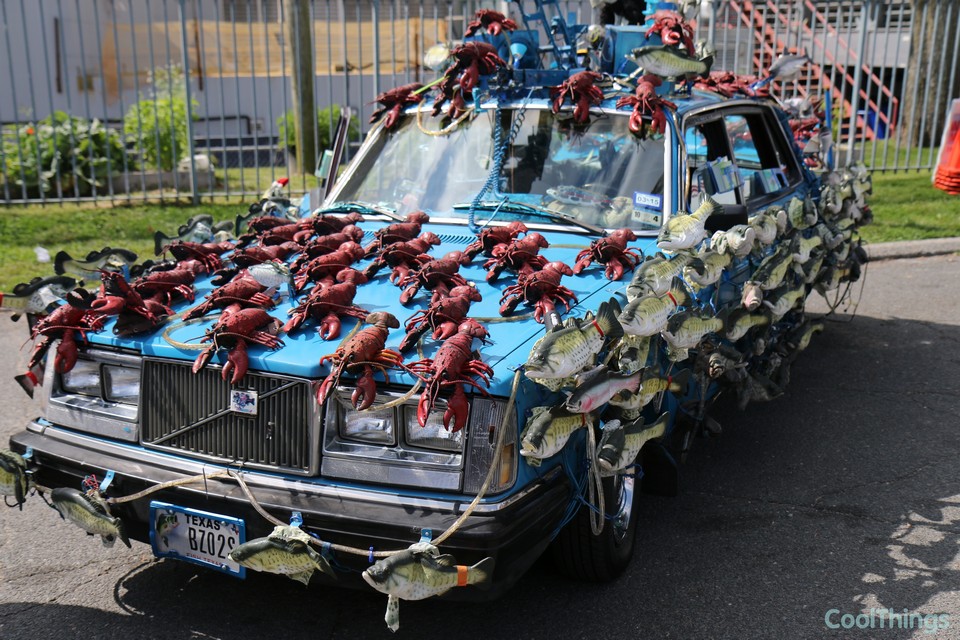 Any time you try to explain what the Sashimi Tabernacle Choir Art Car is, it sounds lame.  Heck, if you see a picture of the darn thing, it even looks lame.  Once you see it doing what it does best, though, that’s when you understand: it’s one of the most ridiculously entertaining things ever made.

You know those electromechanical fish and lobster toys attached to a trophy mount that sing and dance Take Me to the River in a super annoying manner?  Well, they took 250 of those and plastered them all over a Volvo.  Then, they hooked all of them up together, so they will sing and dance in unison, performing songs that range from opera to pop to punk rock.  Oh yeah, everything is tightly choreographed by the conductor, who happens to be one of the lobsters.

Here’s an older video of the car in action.  Yes, it’s still every bit as awesome today. 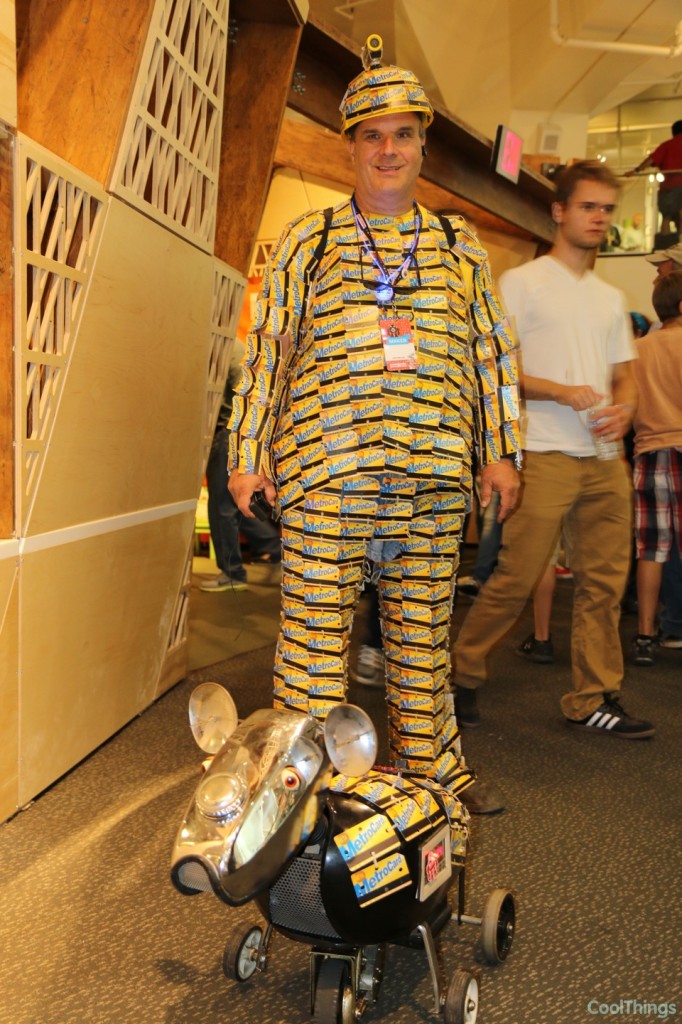 A staple at Maker Faire events, Gregory Rodolico regularly shows up with the MetroCard Robot, a droid made from a variety of junk parts salvaged straight out of the 80s.  Or maybe 70s and older.  It comes with a body built out of an old X-ray machine (the kind that probably detected tuberculosis back when it was incurable), with an onboard relay, cassette player, and a rheostat.  To complete the salvaged theme, Rodolico pilots the droid using an equally ancient AM/FM receiver.   Oh yeah, the name comes from the multiple New York Subway cards plastered across its body.

The video below shows the automaton doing its typical routine.

A 3D printed car is probably something you joked about at some point in time, thinking the technology for that will not be feasible for years.  Well, I know I did, so I never saw Local Motors’ Strati, the world’s first 3D-printed car, coming.

Originally unveiled at the International Manufacturing Technology Show in Chicago earlier this month, the Strati showed off its wares at Maker Faire, too, lighting up people’s imaginations about what is really possible right now with 3D printing technology.  Each of the vehicle’s 40 parts (yes, only 40), save for the electric motor and the batteries, are really 3D printed.  Crazy.

The even crazier part? Local Motors actually intends to sell this thing soon (either end of year or early next), priced between $18,000 and $30,000. 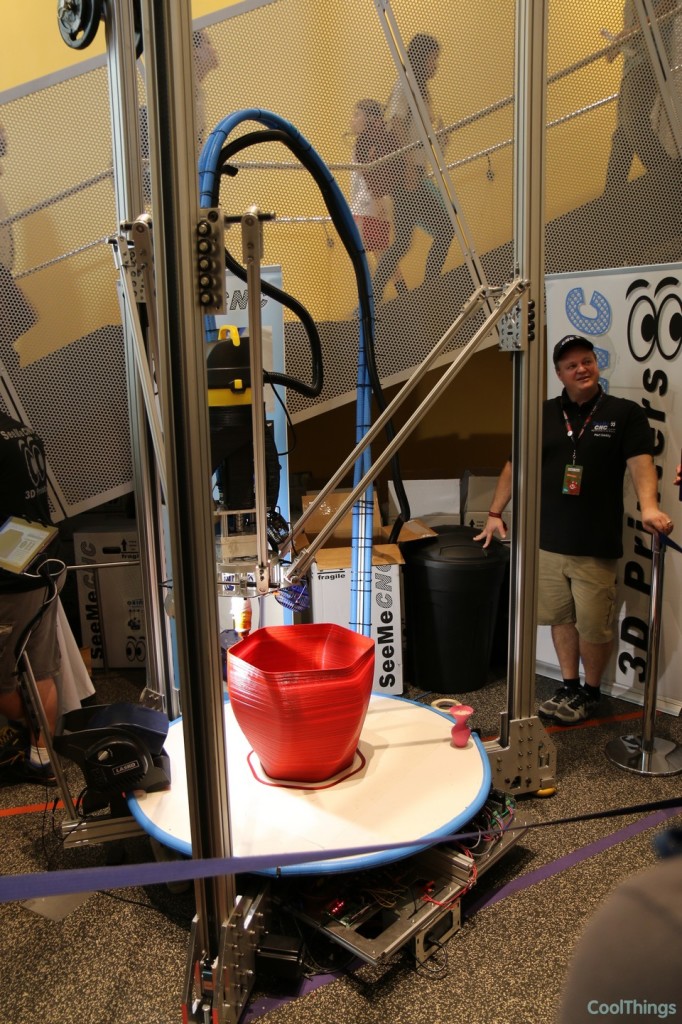 There was a time when 3D printers were a big draw in Maker Faire.  With the technology’s increasing ubiquity, though, it feels a little too commonplace now to really steal any attention.  Unless, of course, you have a 3D printer the size of See Me CNC’s PartDaddy. 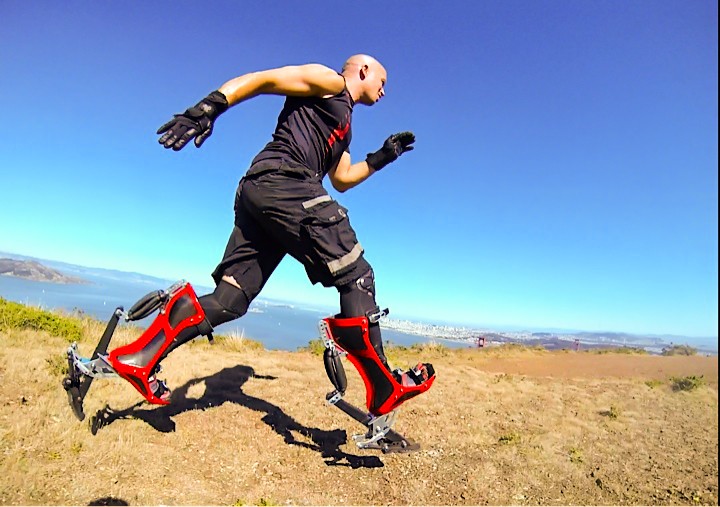 Similar to Jumping Stilts, the Bionic Boots is a spring-loaded footwear that lets people run at superhuman speeds.  It seems to be optimized strictly for running, rather than jumping, with the ability to give wearers a top running speed of 25 mph (as opposed to 20 mph for high-end powerbocking stilts).  The boots are made using a mix of carbon fiber, metal, and speargun springs.  Creator Keahi Seymour claims that with further refinement, he’s looking to optimize the boots to raise running speeds to a whopping 45 mph.

While it looks like a strangely-designed toy car, the Rova3D is actually a 3D printer that can produce objects using up to five different materials/colors at a time.  That way, you can finally print a rainbow-colored unicorn in just one building session.  It features five Bowden-style extruders, three options in nozzle sizes, nozzle temperatures up to 450°C, liquid-cooled print heads, heated bed up to 125°C, and a build area measuring 11.18 x 11.88 x 7.55 inches.

Check out a video of the Revo3D printing a Mars Rover model. 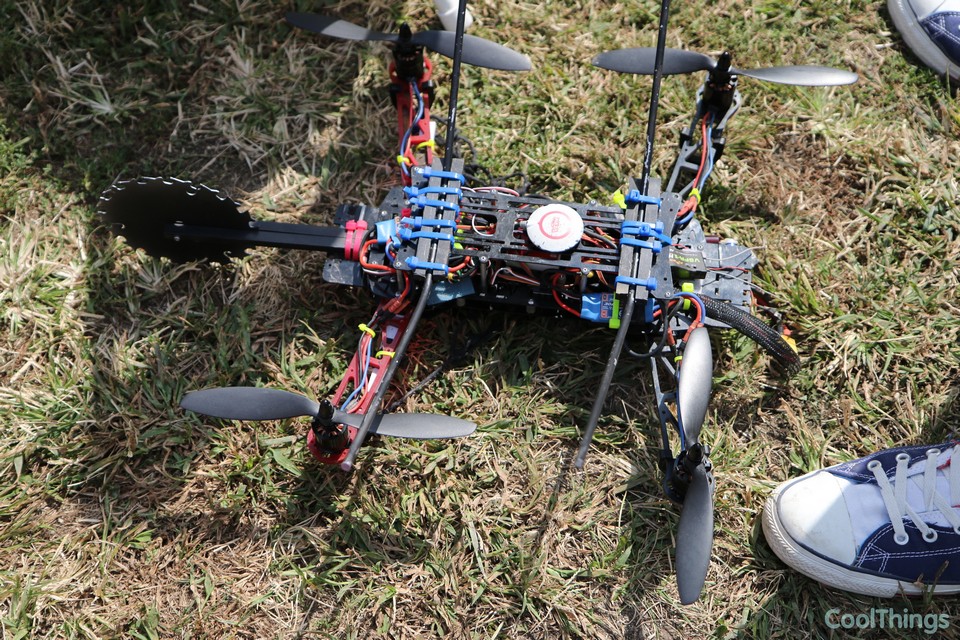 A fight club for quadcopters, Game of Drones is a combat league that pits drones against other drones in an all-out rotor-powered aerial warfare.  Well, as close to aerial warfare as two relatively harmless quadcopters trying to knock each other down to the ground can get.  For now, they battle relatively unmodified drones, but I can’t wait to see a year forward when people begin to arm their drones like battle bots straight out of a post-apocalyptic robot future.

Since drone-fighting likely requires a more durable flying robot than what’s currently on the market, they’re also selling their own Action Sports Airframe, which is designed to resist fire, water, hard impact, and even shotgun fire.  Well, they actually just hit it with birdshots instead of a slug, but still impressive all the same.  Check the video below and be amazed.