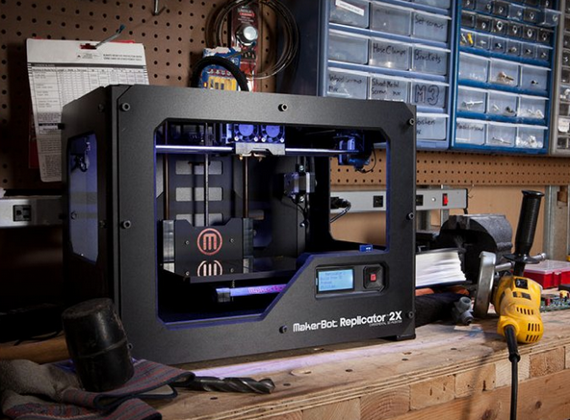 Desktop 3D printers — they are improving.  And I wouldn’t be surprised if we can make some incredibly detailed toys out of them in just a few short years.  The MakerBot Replicator 2X takes us closer to that, bringing two-color printing and a much finer printing resolution.

A two-color version of the recently-released Replicator 2, it brings the same 100 microns per layer of resolution, allowing you to produce 3D objects that are smoother with little post-production work (e.g. sanding) needed.  Want to keep printing with ABS plastic even though it’s trickier and more challenging (which is why Makerbot took it out of the 2)?  You can do it with this one, as it supports the popular material on top of the previous support for PLA.

Aimed at more advanced and more experimental 3D hobbyists, the MakerBot Replicator 2X features dual printing heads that allow you to use differently-colored plastics to produce a single object.  Features include a redesigned chassis, an aluminum build platform, and an enclosed print area walled up by see-thru plastic windows (it retains heat better, allowing for faster printing).  It can produce objects up to 9 x 6 inches (h x w) in fine detail.

While we’ve seen the 3D printer market start getting flooded with new entrants to the game, Makerbot’s early foray into the scene definitely gives them a leg up in the competition.  For now, the MakerBot Replicator 2X could still very well be the best option in the market, although new companies (like the CubeX) are definitely gearing up to give them a run for their money.  It will be available in the next few months, priced at $2,799.