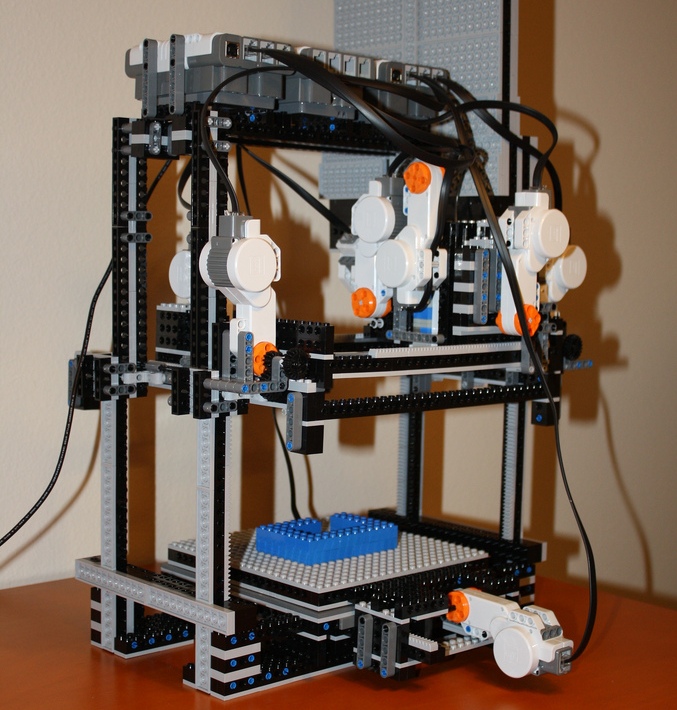 Lego is awesome.  Except for the part where you’ll have to do all the work of creatively locking bricks together to form anything worthwhile.  With the MakerLegoBot, you won’t even have to.

Put together by Will Gorman, the robot can take a virtual 3D model and bring it to life using Lego bricks.  Yep, it’s just like a 3D printer, except it constructs everything using interlocking toy bricks, instead of lasering the edges out of a blob of plastic.

That’s not even the crazy part.  The MakerLegoBot is actually made out of Lego parts itself – three sets of Lego Mindstorms NXT Bricks and nine Lego Mindstorms NXT motors, to be exact.  It’s a Lego robot that builds Lego models, hinting at the self-replicating robot future we likely have to look forward to.

As you can tell from the name, this is partly based on the impressive MakerBot, a low-cost 3D printer designed for home use.  It works in a similar manner, too.  First, you design and save your 3D model in MLCad.  Once that’s done, a Java program on the PC picks up the resulting file, determines the necessary print instructions to build it and sends those commands over USB to the robot.

A feed system containing five different types of Lego bricks (it can only hold up to 35 at a time, so you might have to keep replenishing) are connected to the robot.  The automaton requests the necessary brick, which it will then assemble into a finished product.  The current system restricts the resulting 3D models to a height that equals 12 bricks stacked together.

While the MakerLegoBot will probably see multiple iterations over time, it is already pretty impressive, despite the existing constraints.   The robot will be shown off at LegoWorld, which takes place from October 22 to 26 in Zwolle, The Netherlands.  Instructions for building your own are also available from the website.