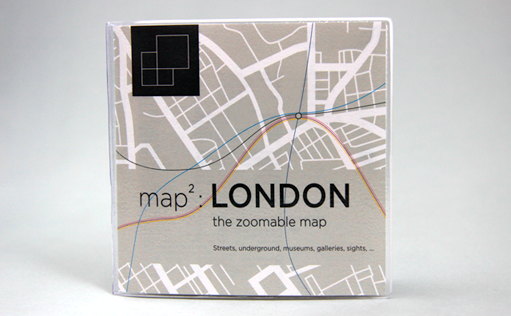 Maps work better with Zoom In and Zoom Out functions.  That’s why we all love Google Maps as a handy alternative to carrying a fold-out map of the city.  Well, Map2 is looking to cut into our over-reliance on electronic maps a little by adding at least one level of zoom to the classic paper map.  Yes, a Zoom function.  On paper.

The trick, as it turns out, is in the fold.  As in, the way the paper map is folded.  On the default fold, you get a 40 x 40 cm map of the city of London.  Unfold one of the four 10 x 10 cm quadrants, though, and it opens to a zoomed-in view of that area (another 40 x 40 cm map), allowing you to see more of the same spot without having to wrestle with a really large sheet of paper. 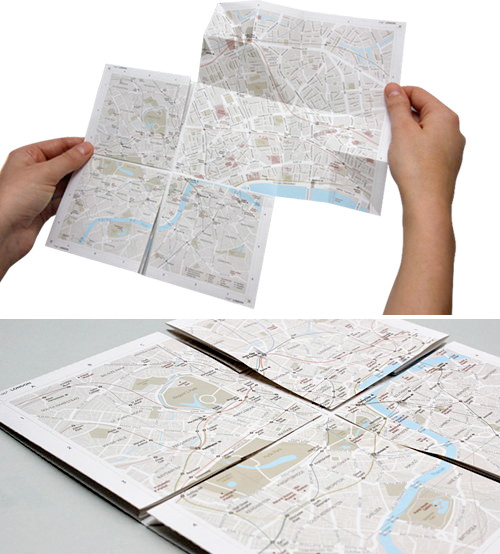 Strictly available for London (as of now), the Map2 shows a non-zoomable map of Greater London in the back and a zoom-friendly street map in front.  Using the main map with its four fold-out close-up levels, it provides a useful and compact guide to the city that details all the subway lines, along with landmarks for over one hundred museums, galleries and other places of interest.  It also comes with an informational leaflet with listings for streets, useful contact numbers and the official tube map.

With its zoomable mechanism, it’s quite possibly the coolest map I’ve ever seen.  Not that I can remember the last time I looked at a real paper map, mind you (probably eight years ago).  Still, the fact that it can fold into a 10 x 10 cm bundle (with an included clear PVC wallet) means it’s as pocketable as it is clever.  Which is just about perfect to make me want to carry a map again.  That’s in case I ever end up in London, of course, which isn’t likely, since life is good here in my kingdom.

The Map2 (that’s actually written as Map^2 or Map squared) for London is currently available in tear-resistant paper for £8.00 (about $13).

[The Zoomable Map via Oh Gizmo]