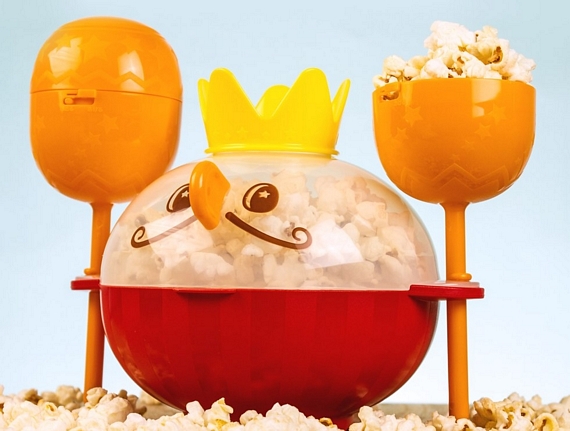 That is how Happinet describes the Maracas de Popcorn, a popcorn bowl set that turns the erstwhile boring task of microwaving popcorn into a ridiculously elaborate affair.   And their slogan isn’t kidding – dancing really is, preferably, involved.

Maracas de Popcorn consists of a microwaveable popcorn bowl and a pair of maracas. Yes, a pair of maracas that you can fill with whatever tiny, noisy objects you can find, which you can shake while you’re dancing to make wonderful sounds. Except, instead of using them as actual maracas, they’re intended to be used as popcorn shakers. Pour some of the freshly-microwaved popcorn into one, add your choice of spices, and shake away. Again, preferably, while you’re dancing.

Being a Japanese product that embraces the ridiculous, the popcorn bowl is duly injected with a healthy dose of kawaii. As in, they added a handle on the lid that actually looks like a nose, with two eyes and a moustache drawn around it. The side handles on the bowl serve as the character’s hands, so they come with integrated slots for holding the maracas during storage. Oh yeah, the bowl happens to be a king, so it wears a crown, too, which, when removed, can serve as a measuring cup for filling the bowl with your choice of popcorn kernels.

Granted, you’ll have to volunteer to be silly if you’re going to have fun making popcorn with this thing. That’s why, from the looks of things, they’re aiming this at silly little kids, who probably wouldn’t mind busting out the moves while shaking their maracas, as their parents look on with crossed fingers, hoping that the popcorn doesn’t end up all over the floor. Again.