Martin Jetpack: A Fully Functional One-Man Aircraft Before The End Of The Year? 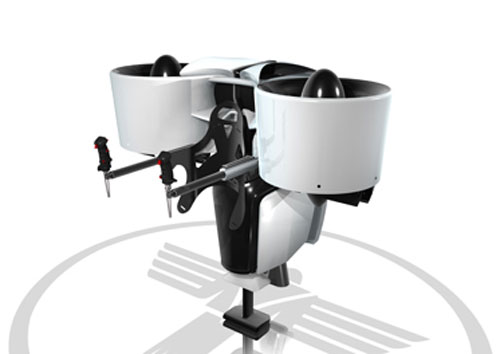 Jetpacks have been around in one form or another during the last few years.  Unfortunately, there hasn’t been one that worked well enough for actual commercial use.  Makers of the Martin Jetpack are claiming they’re ready, which I’ll only believe if I see one of their executives fly over a roof with this thing on his back.

The Martin Jetpack first burst onto the scene last year, as the company showed off the device buoying some guy a foot or so up in the air.  Not all that impressive, although, definitely a step in the positive direction.  To quell rumors that the personal flyer is a disaster waiting to happen, Martin Aircraft Company recently released a new video showing the device a little higher up the air and doing a bit of maneuvering – pretty impressive, to say the least.

Of course, the real plan is to see the jetpack fly well above traffic, which I’m not sure is even possible yet.  Martin Aircraft Company claims it will be ready by the end of the year, however, and are even promising at least ten deliveries before 2009 is over. Good luck to those first 10 customers, though – they’re braver than I’ll ever be.

Sporting 5 x 5.5 x 5 feet dimensions, the Martin Jetpack should be capable of flying for up to 30 minutes.  The company boasts a flight range of 31.5 miles on a five gallon tank of gas, which should be enough for most daily commutes.  It uses a 2.0-liter Martin Aircraft V4 2-stroke engine with 200 hp and should be able to hover up to 8,000 feet.

Forget about your dreams of hauling a jetpack and pushing a button to take flight, however.  The rig is essentially a single-passenger vehicle that weighs over 500 lbs with a full tank of fuel and complete safety equipment in tow.  It comes with an integrated ballistic parachute to get you down safely in case anything goes wrong (given how new the technology is, you can bet something will).

The Martin Jetpack costs $100,000 apiece, which is cheaper than many luxury cars we regularly see. You will be required to pass the company’s pilot program in New Zealand before receiving your own unit, which you can then use to fly back home, provided you live 31.5 miles from the land of Kiwis.

Check out these plans to make your own flying machine available on web until you can afford your own jetpack.