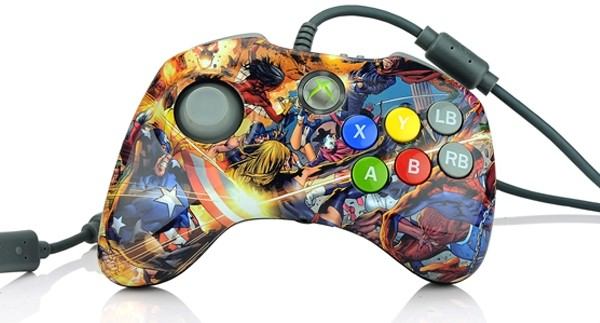 AAA fighting games deserve an equally high-quality controller.  And if you like your arcade-style controls cupped on your hands, instead of set on your lap, this could be your new favorite joypad:  the Marvel Versus Fighting Pad.

Designed by PDP and Marvel, the Xbox 360 controller brings you classic arcade controls in a more familiar and compact form factor.  Instead of a tabletop box, you get the usual Xbox 360 controller shape that’s decked in an arcade-friendly button layout.

The Marvel Versus Fighting Pad features micro-switch activators under a rubberized over-tooled cap, which pair the response of real joysticks with the comfortble feel of thumb pads.  Button layout takes on a 2 x 3 front-facing configuration, as you will usually find with an actual arcade system (the LB and RB  shoulder buttons were moved).

The controller, which comes with a satin grip finish, is drenched in colorful artwork taken from the pages of Marvel’s 2010: Siege.  Like other third-party controllers for the console, it’s wired, so there’s no response delay and no need to bother yourself with a constant supply of recharged batteries.

Currently available on preorder, PDP is shipping the Marvel Versus Fighting Pad on February 14th, making it a perfect Valentine’s present that you can hint at the girlfriend to buy for you.  Given most girlfriends’ aversion towards a man’s natural proclivity for comic books and fighting games, though, we’re guessing you can also buy it as a Valentine’s gift for yourself.  You can reserve one from the PDP website, priced at $39.99.