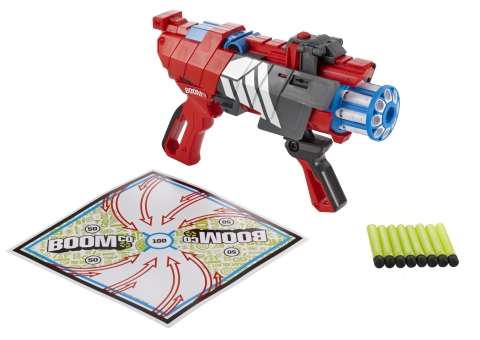 It’s not that Nerf never had any competition in the foam dart battle space.  It’s just that they’ve, pretty much, dominated the niche so well that nobody else even registers on the radar.  That could change soon with Mattel’s new line of BOOMco Blasters.

Rather than go head-to-head with Nerf’s huge range of ridiculously powerful foam-firing blasters, Mattel is starting out small, releasing air-powered shooters (no batteries) rigged to send foam darts flying into your target of choice.  That means, it’s likely geared more towards kids than a typical army of office nerds who wage their battles during afternoon coffee breaks. 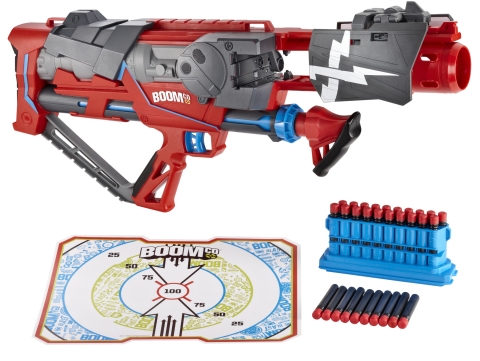 Two BOOMco Blasters have been annouced: Twisted Spinner and Rapid Madness.   The former has a 310-degree rotating barrel that spins every time you fire and a range of 70 feet, while the latter is a high-speed blaster capable of shooting 20 foam darts to distances of up to 50 feet in just a few seconds.  The Spinner also has a transforming shield (activated via push button) that you can equip to block darts and capture them for your own use.

Instead of darts that just bounce off, the blasters use ammo they’re calling Smart Stick, which uses tips with integrated adhesives that attach to certain surfaces.  It will only stick to surfaces that are also part of the Smart Stick line (like the transforming shield on the Twisted Spinner), though, so we’re guessing they’ll be coming out with vests and other wearable targets down the line (right now, they only have target boards for shooting practice).

The BOOMco Blasters have recently launched in some European countries, with other markets getting them on shelves in the coming months.