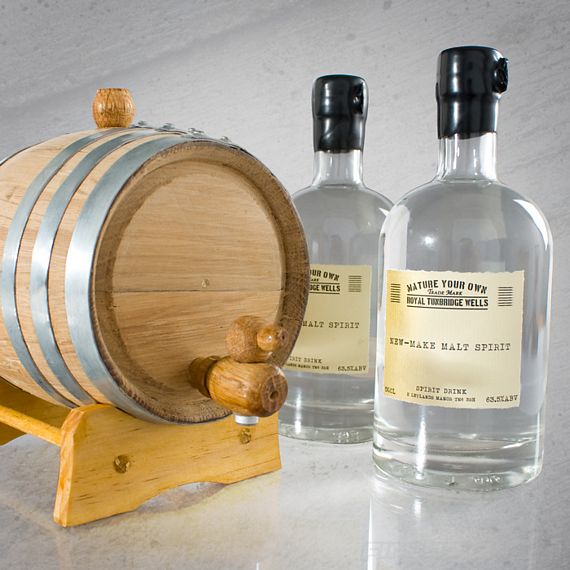 You miss living in the backwoods, spending your days chopping logs, hunting deer and making moonshine to consume for your nightly libations.  Good news is, there are ways to assuage the longing.  You can saw wood in your workshop, shoot ducks in the living room, and even make your own spirits with the Mature Your Own Whiskey Kit.

Don’t worry, this isn’t some complicated thingamajig that requires you to learn any actual skills.  Far from it.  Instead, you get pre-made malted barleys that you can then age in your very own Kentucky Oak Barrel for as long as you like.  Want to drink that thing in a few days?  Hey, it’s your crappy alcohol.  Want to wait years?  Suit yourself.

The Mature Your Own Whiskey Kit comes with two 500ml jugs of spirits, a freshly-toasted Kentucky Oak Barrel (either medium to heavy char) with a built-in tap, and a funnel for pouring spirits into the cask.  The barrel measures 11 cm in diameter and 15 cm long, with an estimated usability of three aging sessions (more than that and the oak flavor is likely to disappear).

A caveat: unless you know what you’re doing, you’re likely storing the barrel under less-than-optimal temperatures, which is fine (it will still mature), so long as you don’t mind losing 3 to 5 percent of the stuff per month due to evaporation.  Do note that the evaporation limits the amount of time you can age the whiskey (think a few months at most, instead of years).

Pricing for the Mature Your Own Whiskey Kit is available now from Firebox, priced at £99.99.