Say Goodbye To Sandbags, Soldier: McCurdy’s Armor Is A Portable Steel Fort That Sets Up Like Legos 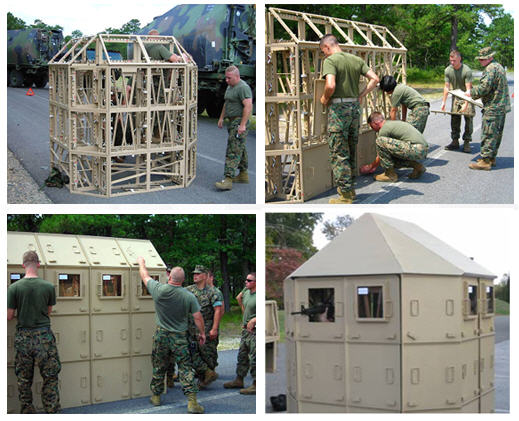 I’ve never been to war, but stacking sandbags to set up a defensive line just sounds like a terrible way to spend the day.  A defense contractor finally did something about it with the McCurdy’s Armor, a steel-plated wall that provides equivalent protection while setting up within minutes.

Named after a Marine who died in the line of duty in 2006, the new military rig boasts assembly that requires no tools or equipment, with the company going as far as to call it a “LEGO-type system.”  Even better, it divides into flat, stackable pieces when not in use, allowing you to pile it in the back of a truck for carrying with you to the next mission.

McCurdy’s Armor houses soldiers behind a 6.5 feet tall structure using individual panels that you can arrange into U-, V- or J- shaped covers of variable size (depending on what the situation calls for).  Not only will the steel walls fend off bullets, they’ll ably protect soldiers from grenades, mortars and RPGs too.  Safety from zombies not guaranteed, however.

It comes complete with windows, of course, so you can peek out and return fire (then hide again, because, let’s face it, they’re gonna be aiming for those small openings).  You and three buddies should be able set up one such shelter within ten minutes, which is a heck of an improvement from the hours you’d otherwise spend stacking sandbags under the blistering sun.

The Marine Corps has currently spent $800,000 to buy 14 kits, which means you can probably score one for under 100 grand if you know the right people.  I’m not exactly sure what non-military folks can use McCurdy’s Armor for, but it’s so cool, I want to take one for my next camping trip.  You never know when an RPG-toting bear might come out of the woods, after all.