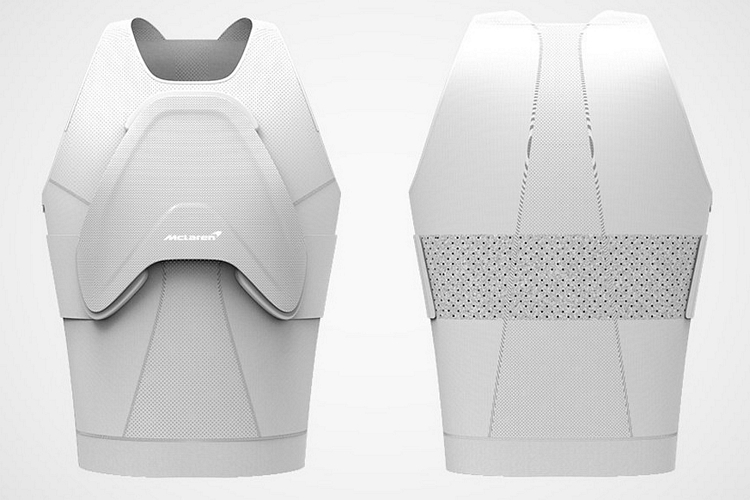 We’re not sure who it’s designed for, but the McLaren Invincible Shield sounds like it has the makings of a next-gen protective armor. Using materials and technology borrowed from McLaren’s Formula One car for next season, the custom healthcare solution reinforces your torso with the same meticulous engineering as the most sophisticated race cars.

Designed by McLaren Applied Technologies, the wearable is built for an individual client who asked for something that will protect the upper body after undergoing surgery (which, we’re assuming, is either for his ribcage or vital organs). Basically, it serves as a second rib cage on top of your actual rib cage, so that your vital organs are doubly-protected from any type of impact.

The McLaren Invincible Shield uses Dyneema fibers as the primary material for damage containment, while relying on a toughened resin material mixed with woven fabrics for impact resistance. Those fabrics include Zylon, which F1 teams use to protect their cars against side penetration, as well as stiff carbon fiber to allow it to flex without breaking while carrying heavy loads.

According to the outfit, the armor is designed to be protective while being discreet, so the build is both lightweight and slim. That way, it can be worn under regular clothes without making you look like you’ve got a mascot costume underneath. Basically, it just makes you look like you’re a little more buff in your upper torso, so you can just tell people you’ve been putting in extra hours in the gym while going on a stack of potent anabolics. Or something.

The McLaren Invincible Shield, basically, looks like ballistic armor, albeit with a rigid shield in a shape similar to a boomerang floating over the chest and sternum areas. During impact, that top shield disperses the impact towards three sections, each of which is fitted with a unique gel material that attenuates the load to protect the ribs and underlying organs. That sits on top of a layer that stretches all the way to the sides, which sits over a base armor that’s custom-molded to the shape of the client’s body.

From what we can tell, the armor is designed for standard day-to-day use, with no specific critical application in mind. The described functionality, however, should make it an excellent protective tool that can help alleviate any potential damage from car accidents and similar mishaps. Or, if the client is an action hero, five-story falls and hand-to-hand combat against a heavily-tattooed crew of henchmen and thugs.

We don’t know how the armor compares to current protective equipment for race car drivers, motorcycle racers, and other motorsport athletes, but we’re guessing it’s something that can be modified to suit those specific needs. No, we don’t think you need this kind of armor for your medieval-themed LARP battles, but if you want to get rough battling other LARPers in the park, something like this could be the protection that you need.

You can learn more about the McLaren Invincible Shield from the link below.