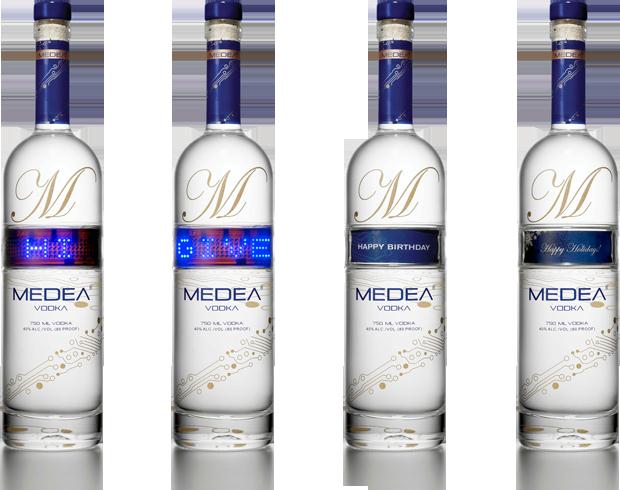 People always buy their alcohol for the flavor and the kick. Medea Vodka, on the other hand, is giving us an entirely new reason to grab one of their bottles: programmable LED displays. Huh?!?

A distiller of fine vodka for seven generations, Medea’s history goes back to the 18th century. While I haven’t even heard of their brand of spirits until now, the website does a good job of selling their experience in using the “finest whole grain wheat to perfect the time-honored process of single batch distillation.” To put it simply, I wouldn’t mind dropping cash for a bottle of their “subtle, flawless” vodka, even just to try one.

Medea Vodka is booze made out of Schiedam, Holland, an area touted as “the world’s first center of distillation excellence.” Touted as the “world’s first interactive bottle,” they go beyond merely housing the fine spirit in a container, going so far as to integrate a programmable LED display right on the actual vessel’s curved shell. The screen, which can be controlled and programmed using buttons along the side, can hold up to six messages at time, each one using up to 255 characters.

Sure, you can buy one of those programmable LED buckles and wrap it around a bottle of Absolut to similar results. This one, however, has a LED screen that’s custom-fitted to the bottle’s contour (it curves) – something you aren’t likely to find at your favorite neighborhood novelty shop.

Consisting of a drink you can get wasted to and a bottle you could find some nifty uses for long after you’ve milked the last drop, the Medea Vodka sounds like a good deal for the retail price of $40.