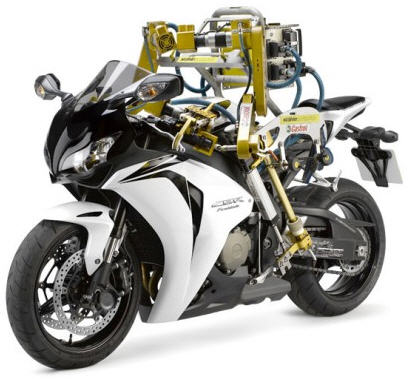 Remember those motorcycle attack robots chasing after automobile-driving targets on Terminator?  This is their ancestor, Flossie, who tests motorcycles for lubricant company Castrol.

Developed exclusively for their testing use, the robot is a self-learning heap of steel, whose sole purpose of existence (right now) is to help Castrol evaluate its products with maximum efficiency.  While Flossie doesn’t actually take the bike on the road, it does manage some things that more self-aware testers probably won’t be able to pull off.

According to Castrol, the robot can manage most any type of scooter or motorcycle, ably learning its gear change pattern, clutch drag and throttle response, among other details.  It tirelessly performs the tests in a stationary platform, with the level of precision only computerized robots can effectively ensure.  More importantly, Flossie does it without ever being bothered by the roar of 16,000rpm engines and extreme temperatures.

First, the EATR, which feeds on living things.  Now, this Flossie character, who, theoretically, should be able to learn how to ride motorcycles at some point in its future iteration.  I’ve always wondered whether robots, zombies or aliens will be the first to take over the world – I think I’m leaning towards a Terminator-style future now.  Yep, I have no doubt about it.

Check out Flossie in action at the YouTube video below.

[via Faster And Faster]