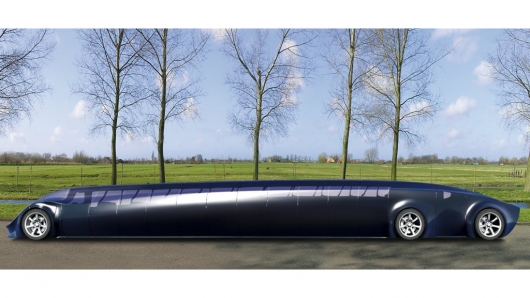 It looks more like a super-stretched limo than a bus, but the latter is exactly what the Superbus is billing itself. While it can’t fly like anything carrying a “super” in its name should do, the new concept vehicle can ferry passengers with utmost convenience, all while proposing a novel, more flexible solution for public transport.

Designed by a team at the Delft University of Technology (TU Delft) in the Netherlands, the Superbus puts sustainable mobility at the forefront. The weird-looking vehicle, in fact, is just one part of the deal, with the complete concept imagining a new type of dedicated infrastructure as well as passenger logistics.

Much of the innovation is obviously centered on the car, which can carry up to 23 passengers. Making boarding and getting off easier than traditional buses, the Superbus comes with 16 individual gullwing doors, allowing you to get a seat without having to march through an aisle full of commuters. It comes with three cabin designs, each one configured to accommodate either individual or group passengers. The first one comes with a single row of forward-facing seats; the second, with two rows of seats that face each other; the third does with a similar two-row arrangement, but adds a foldable conference table in between. 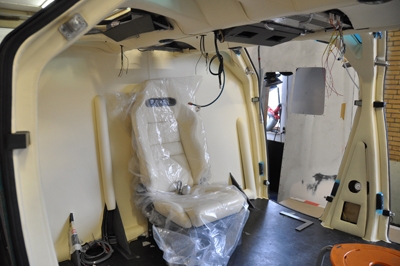 The vehicle runs using four EV2M electric motors, delivering a combined power output of 300kW. Front and rear aluminum sub-frames allow the vehicle to adjust its ground clearance anywhere between 7 to 40 cm. At the lowest clearance (which it will only use on specially-designed flat roads), it can run at a top speed of 150mph. For improved safety, it comes with an electronic guidance system, an obstacle detection system and a total 750 sensors all over the vehicle (detecting such things as a loose seat belt and objects blocking the door).

Yep, it’s quite the ambitious ride. Surprisingly, it’s more than just a far-out concept. In fact, a full prototype is already on the way, with most of the chassis, glazing, body panels, and interior already finished. It’s also got the support of the Netherlands government, which has pledged 77 million Euros to help fund its development over the next several years.