Meet Your Domestic Servant of the Future – ApriAttenda 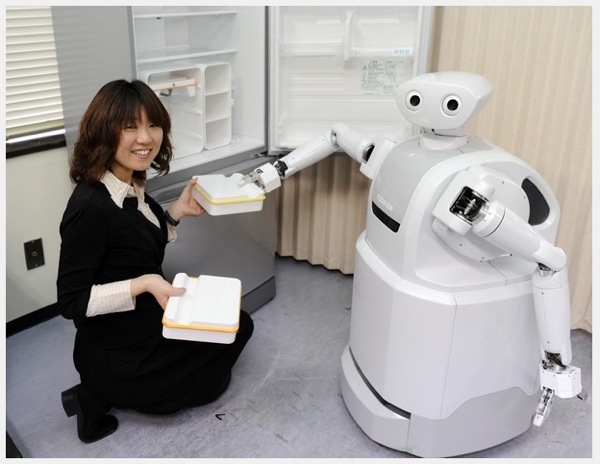 For many years, the greatest indicator of a hot new gadget was its functionality. Think back to one of the first inventions, the spear, and you’ll see what I mean. Suddenly flocks of people wanted nothing more than this tool that made helped them live a better life.

Only a short time ago, we entered the era of entertainment. Thanks to the invention of the television, if it couldn’t capture your interest by mimicking life in the most absurdly plausible way (and if it couldn’t do so within thirty seconds or less), it didn’t get our attention.

Now we’ve entered the age of convenience. The internet has put an almost limitless source of knowledge, entertainment, and functional gadgets at our fingertips. But what do we do with the rest of the world now that we’re immersed in cyberspace? Would it be easier to hire a maid to clean our home, cook our meals, wash our clothes, and perhaps even to wash us?

Perhaps, but an even better solution is to embrace the newest gadget, a domestic robot called ApriAttenda. She looks like a hybrid of C3PO and R2D2, a one-meter tall droid that beckons to your call. She was originally designed to help old folks around the home that no longer had the strength to open doors or reach high shelves. With ApriAttenda’s versatile arms, she’s more than capable of fulfilling those tasks, but I think her purpose goes far beyond her creators intentions.

Sci-fi writers may speculate towards the implications of replacing humans with robots, but I say why not embrace those implications now. There’s no need to worry that this robot will one day betray you. ApriAttenda comes equipped with stereo vision and and voice recognition software, so once she’s programmed to do what you want, if anyone is enslaved by future robots, at least this one will remember who it belongs to. Bring this robot into your home and discover its abilities to make your life more convenient today. Off course clear this move with your wife first.