Mega Shark Vs Giant Octopus: Monster Movie Of The Year 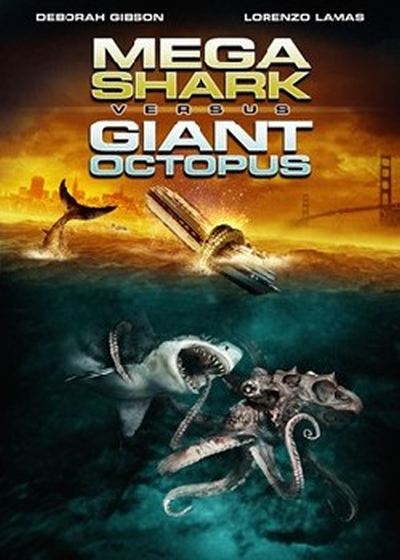 A pretty expensive joke or a genius of a B-movie?  That’s what people are asking with the viral spread of the trailer for Asylum’s newest straight-to-DVD flick, Mega Shark vs. Giant Octopus.  How many low-budget movies manage to look this cool, after all?

The trailer, on its own, speaks volumes.  They pit off one Mega Shark, shown eating entire bridges, against one Giant Octopus, who capably measures up to his sharp-toothed nemesis.  With CGI that’s hypnotically primitive, a premise that’s too obvious to warrant any thought and a cast that looks curiously familiar, the trailer for the film has generated more buzz than any of Asylum’s many other retarded offerings (from Snakes on The Train to The Transmorphers) ever did.

Directed by cult filmmaker Jack Perez (credits include the original pilot for Xena: Warrior Princess and 2004’s Monster Island), the movie involves two monstrous creatures frozen in ice over 10 million years ago and have suddenly become reanimated, terrorizing civilization as we know it.  With Dynasty stud Lorenzo Lamas and 1980s pop princess Debbie Gibson sharing top bill, the movie’s promotion just took on a life all its own.

With the trailer exclusively unveiled by MTV Movies, people are wondering whether this is a real film or an elaborate ruse from MTV.  Since the movie has a street date of May 26, there’s good likelihood that it’s a stunt for MTV’s upcoming Movie Awards, scheduled just a few days after that.  Regardless of the truth, though, you can’t deny one thing: many of us have now incurred an inexplicable desire to watch Mega Shark vs. Giant Octopus in its entirety.

Kudos to Asylum for the genius trailer if this is a real movie and even more props to MTV for the brilliant prank if this was all a joke.  Since Debbie Gibson is all for B-Movies now, how about getting her arch-nemesis Tiffany and having them share top bill for some sort of middle-aged chick flick with monsters and zombies?   I’ll get in line to buy that.