Mercier-Jones Hovercraft: Floating Vehicles Can Look Like Sportscars, Too 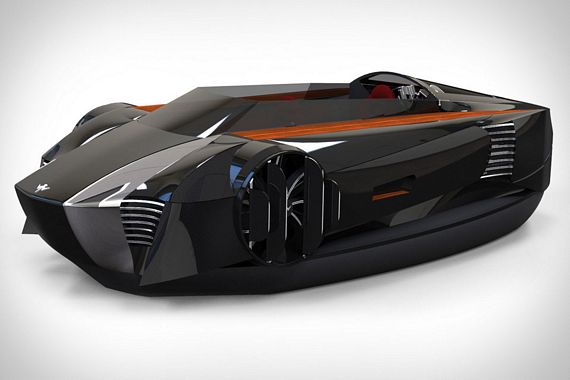 While hovercrafts already exist, we’re still waiting for mass-produced ones that we can ride to work day after day, the same way 50s-era B-movie writers imagined it back in the day.  Maybe, the Mercier-Jones Hovercraft will be the vehicle that takes us closer to our rightful air-cushioned future.

As with many ambitious projects, there’s probably a good chance this thing won’t end up being made.  Still, it’s one exciting ride — one that will probably get you as much tail as your favorite Italian badge when you park it in front of a packed club where everyone can see.

From the looks of things, the Mercier-Jones Hovercraft is going to be positioned as a luxury ride, with aggressive lines, low-profile hull, and side thrust ports.  Not only does it bear sportscar looks, it’s meant to perform like one, too, with a “patent-pending directional control system” for advanced maneuverability and “intuitive pilot inputs.”  Body and frame will be constructed with carbon fiber and metal alloys, with a single gasoline engine powering the three independent electric motors that will give it lift and thrust.

Pilots sit in the open-air cabin in a tandem sport seating configuration, with side decks providing additional seating areas.  Features include lower-level hull steps (for boarding from the water), a top deck (for easy entry from the docks), recessed side steps (for entry and exit from dry land), and a backup battery for emergency power.

The Mercier-Jones Hovercraft is still a long way off from coming near production.  If you are interested, though, you can get your name on the waiting list.  More details from site below.