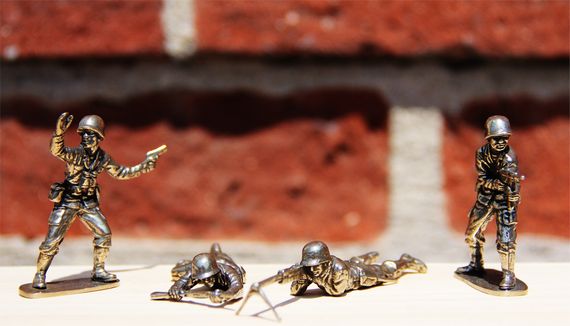 Fighting zombie army men ain’t easy.  It’s so hard, in fact, that your battalion of plastic green army men have now dwindled in count, leaving them easy prey for the horde of zombies taking over the base.  But don’t worry, we called in the special forces: the Metal Army Men.

Made by ACME Approved, it’s a set of army men that are neither green nor made of plastic.  Instead, they’re cast in white bronze, making them harder, tougher and as-good-as-armored in the battle against an ever-growing undead army of flesh-eating zombie army men.  Mankind will prevail!

Available as a set, the Metal Army Men consists of four two-inch action figures clad in traditional army poses and full battle regalia modeled after the classic army men toys from everyone’s childhood.  It features two standing soldiers (rifleman and “follow me” officer) and two on the ground (BAR gunner and machine gun operator), offering sufficient options in tabletop battle dioramas, whether you’re pitting them against zombies, Mechawhales, or plain old green army men with their puny plastic frames.  Do note, if you have a habit of chewing on plastic army men, the results could be disastrous here.  You’ve been warned.

The Metal Army Men is available now, priced at $65 a set.