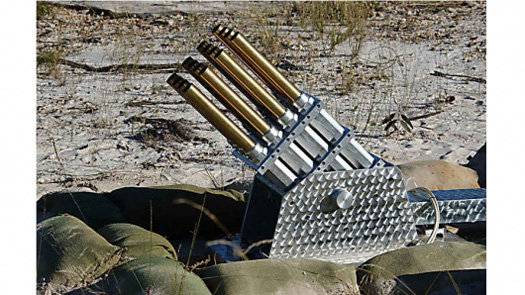 Wars, violence and most of all landmines suck.  They are exactly opposite of anything cool. Even after hostilities have ceased, land mines continue to stay on the ground, playing a dormant trap that will kill, maim and injure innocent civilians years after.   It’s an indiscriminate weapon that sacrifices future safety for convenience – downright irresponsible.  That’s why Metal Storm’s new Virtual Minefield is leagues more humane, providing the same unattended traps for enemy troops, all while being completely easy to clean up.

How does it do that? Instead of charges that you install under the soil, the system uses sensors that alert the automated firing mechanism, which then deploys lethal payload wherever activity is detected

The Virtual Minefield starts with the very first round in each barrel, which fires out a wireless sensor into any area of your choosing (you don’t even have to go to the territory physically).  Because one detecting mechanism can be configured in various ways, you can use a single unit to monitor an entire patch of space (say, a 1 kilometer radius).  Once it recognizes any type of movement, it can immediately send a signal to the computer-controlled firing mechanism, which will then trigger the barrel it came from to commence the attack.  Metal Storm’s electronic weapons system consists of several barrels, each one capable of holding several rounds of payloads as well as firing different types of ammunition.

Such a setup brings many obvious advantages that go beyond the carnage we are still trying to clean up in places like Cambodia and Vietnam.  When friendly troops need to use the covered territory, for instance, you can simply turn the system off until they are clear.  No accidents and no unnecessary mess – just the way the business of annihilating enemies should be.

Metal Storm’s Virtual Minefields sound exactly like the kind of home security system I want to install in my billion-dollar mansion.  Which doesn’t exist, by the way.  But if it does, all those stray cats and stray pigeons will be so screwed, Greenpeace might wage a war against me.